Imagine that you’re a farmer who bought a John Deere tractor for $25,000 – or perhaps a big, heavy-duty model for $125,000 or more.  Then something goes wrong with the computer software inside the tractor (its “firmware”).  Thanks to a new licensing scheme, only John Deere can legally fix the tractor – for exorbitant repair prices.  Or maybe you want to modify the tractor so it can do different things in different ways.  So sorry:  the license prohibits you from bypassing the encryption, taking it to an independent repair shop, or fixing it yourself.

As reported by Jason Koebler in Vice Motherboard, lots of American farmers frustrated by John Deere’s licensing terms are now turning to Ukrainian and Polish hackers to buy software fixes. They want to be able to fix and modify their own legally purchased tractors. (“Why American Farmers Are Hacking Their Tractors with Ukrainian Firmware,” March 21, 2017.)

This very type of problem inspired hacker Richard Stallman to invent free software in the late 1970s. When an experimental laser printer donated to MIT by the Xerox Corporation kept jamming, Stallman tried to develop a software fix so he could help everyone who used the printer. He quickly discovered that the source code for the machine was proprietary -- a stupid, self-serving limitation that prevented him from helping his colleagues.

This sort of copyright control has frequently crippled machinery over the decades. The basic point is to protect a company's market power and proprietary control -- a form of power usually protected by law.  Under US law, for example, bypassing “digital rights management,” or DRM, systems on DVDs, CDs or websites is against the law.

In the case of land vehicles such as tractors, a legal exception was carved out under US copyright law in 2015. But John Deere was able to evade that provision by requiring farmers to sign a new licensing agreement when they buy a tractor.  The license prohibits “nearly all repair and modification to farming equipment, and prevent[s] farmers from suing for ‘crop loss, lost profits, loss of goodwill, loss of use of equipment … arising from the performance or non-performance of any aspect of the software,’” Koelber writes.

Most computer users have become accustomed to the annoying End User Licensing Agreements, or EULAs, which most people click-through and ignore.  (Are you actually going to read through 15 pages of legalese or hire an attorney to re-negotiate the license?)  The EULAs are essentially “contracts of adhesion” – one-sided agreements drafted by sellers to give them greater control over how their product may be used after its purchase and to limit sellers’ legal liability.  Contracts of adhesion purport to be freely made agreements between seller and buyer, but of course, they are nothing of the sort.  They are highly complex pseudo-contracts that reflect only the interests of the seller, which uses its raw market power or technological dominance to foist ridiculous terms on hapless consumers.

So if it’s harvest time and your tractor doesn’t work, the license insists that only an authorized John Deere dealership can fix or modify your tractor.  And if company technicians aren’t available, or 50 miles away, you’re out of luck.  Some farmers fear that the license gives John Deere so much legal authority that it could remotely shut down their tractors that have violated the license agreement.

The Vice Motherboard article describes a movement among farmers to push for “right to repair” legislation:

“If a farmer bought the tractor, he should be able to do whatever he wants with it,” Kevin Kenney, a farmer and right-to-repair advocate in Nebraska, told me. “You want to replace a transmission and you take it to an independent mechanic—he can put in the new transmission but the tractor can't drive out of the shop. Deere charges $230, plus $130 an hour for a technician to drive out and plug a connector into their USB port to authorize the part.”

“What you've got is technicians running around here with cracked Ukrainian John Deere software that they bought off the black market,” he added.

Kenney and [Nebraska hog farmer] Kluthe have been pushing for right-to-repair legislation in Nebraska that would invalidate John Deere's license agreement (seven other states are considering similar bills). In the meantime, farmers have started hacking their machines because even simple repairs are made impossible by the embedded software within the tractor. John Deere is one of the staunchest opponents of this legislation.

The John Deere EULA is just another example of how corporate players are making commoning illegal.  Code can’t be shared; it must be monopolized and monetized.  Farmer Kluthe has modified his John Deere to run on methane derived from pig manure, but it likely violates the EULA.  Richard Stallman would understand the frustration.

Although right-to-repair legislation would be a significant advance, I recently ran across another option:  an open source tractor.  The Oggún Tractor, completely open source but for its drive train, was introduced in November 2016 by an Alabama-based company called CleBer.  The Oggún Tractor -- a fairly basic tractor that is intended for small-scale and family farms – sells for $12,500. 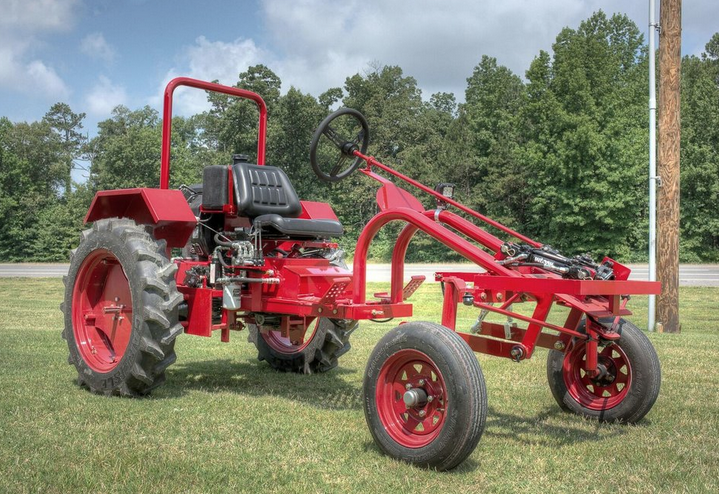 One of the founders is Horace Clemmons, who, as a veteran of the US computer industry, understands the value of open standards and open source development.  CleBer eplains that its business model is motivated by

Open System Manufacturing is grounded in the idea that farm technology can advance more rapidly than it does today and get cheaper every year. While farmers do not currently see this reality for their tools, nearly everyone has seen this reality in the form of cell phone technology that becomes more useful and affordable every year. We have seen these benefits because of Open System Software and Computing. Why not apply the same concept to farm equipment?”

“Our goal is to provide an affordable foundation that allows the people closest to the problems to innovate unique solutions that work for them and their community,” says the company literature.  “It’s not just a tractor, ‘it’s a way of thinking.’” Part of the thinking behind the Oggún tractor is to help revive make local and regional farming at smaller scales.  The low-cost, open source tractor should be especially attractive to farmers in the global South.

There are, of course, other open source agricultural equipment projects such as Open Source Ecology and Farm Hack. However, a difficult problem with those projects is how to capitalize the designs and make them commercially available.  It’s hard to get capital for projects that don’t own intellectual property (i.e., a patent in a proprietary technology). CleBer seems to have solved that through the mission-oriented investments of its two founders, who want to revive small-scale farming in the US, Cuba and elsewhere.

The Oggún tractor is still a very new tractor and one aimed at a very specific market segment of farmers. Still, the fact that it exists at all as a commercial enterprise is remarkable – and its potential, if taken to different levels, could be amazing. There are a lot of owners of John Deere equipment who would surely prefer not to be buying illegal software from eastern European pirates, but helping to build a new, more innovative ecosystem of open source alternatives.