Multilateralism and the Commons

What a pleasant surprise to learn that some people at the United Nations – specifically, its Inter-Parliamentary Union – want to know more about how commons might be relevant to the “multilateral system” of international governance and assistance.

I was happy to oblige by participating on a conference panel last Friday, February 22, called “The Multilateral System in the Public Eye: The Impact of Mass Communications.” (The conference itself was entitled “Emerging Challenges to Multilateralism: A Parliamentary Response.”)

This panel focused on the ways in which new communications media, especially the Internet, are affecting the effectiveness, credibility, and reputation of multilateral institutions such as the UN. The clear takeaway that I took from the conference is that certain players within UN are openly worried about the ability of multilateral institutions to solve the urgent problems of our time. 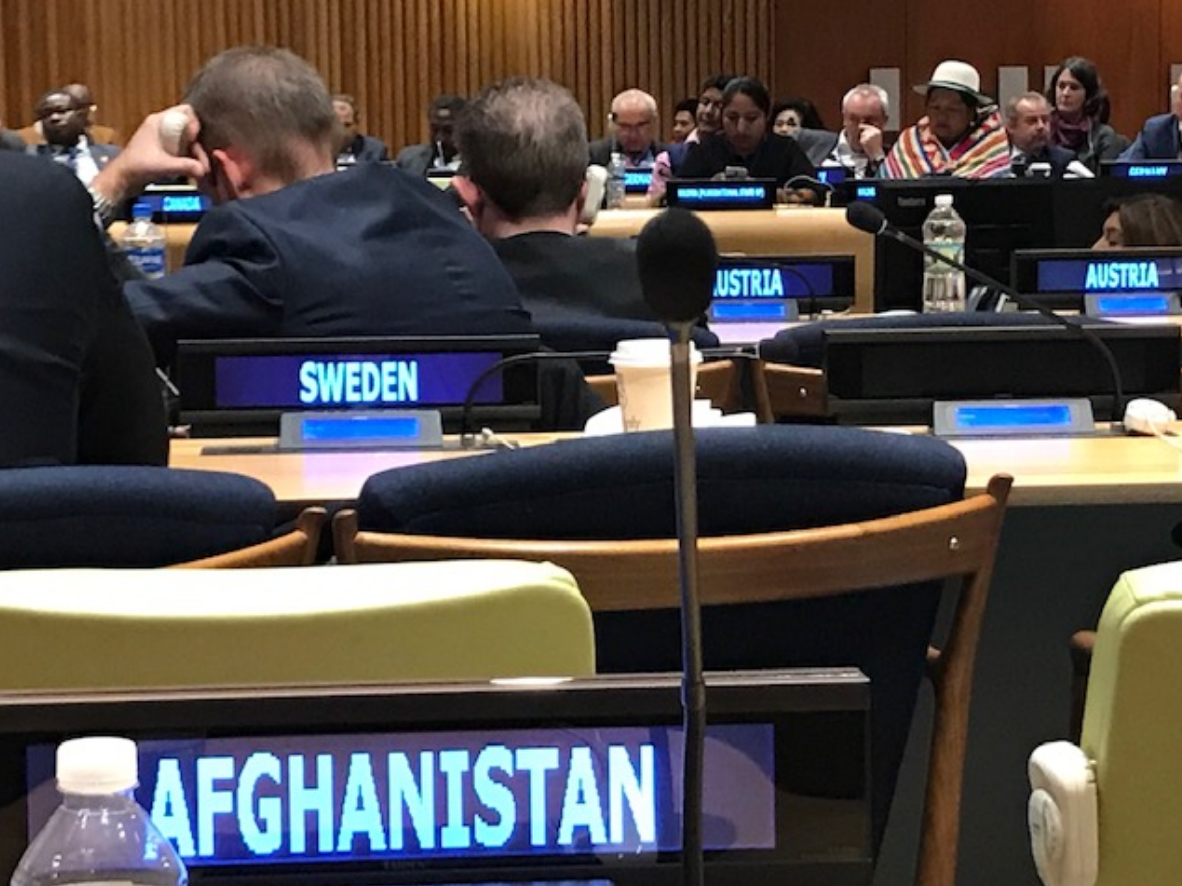 That’s a legitimate concern. As countless problems pummel the world order – climate change, inequality, cyber-warfare, data surveillance, the list goes on – the UN is an obvious forum in which to discuss issues. But with limited authority to solve problems and unwieldy internal governance structures and processes, no one expects bold, timely action. Yet the rise of participatory online media is showcasing the limits of the UN. Hence the open hand-wringing.

I was pleased to learn that there is at least a glimmer of interest in commoning as an appealing option. Regrettably, my sense is that UN discussants are not prepared to explore the commons very deeply or seriously. This is not entirely surprising. Most participants in UN deliberations, after all, are representatives of their national government and are immersed in the bubble of state power and conventional politics. There is a general conceit that policy, legislation, and other top-down actions are the most meaningful and effective ways for dealing with problems.

They’re not, of course. There are other important approaches. Many centralized state and multilateral structures are themselves part of the problem. They tend to consolidate power too much, inviting political gamesmanship, media optics, and corruption at the expense of substantive on-the-ground results. They privilege capital-friendly “market solutions” at the expense of socially minded, creative innovation from the bottom-up. For their part, state bureaucracies often feel threatened by stable, locally grounded commons that assert their own interests and self-sufficiency. And so on.

Below are my prepared comments for the panel, which a presented were abbreviated to accommodate the five-minute limit for each speaker. A video of the panel can be found here. My presentation is at the timemark 11:50 through 16:40.

Multilateralism and the Commons

It wasn’t so long ago that nation-states strictly controlled the types of news, information, and culture that citizens could see and hear. While certain authoritarian regimes still tightly control domestic communications – notwithstanding the Internet – the interconnected global village that Marshall McLuhan predicted in the 1960s is well upon us. Cheap and easy transnational communications is the norm for a great many of the world’s people. Communications from other cultures and countries routinely influence our everyday lives.

It’s not just that people can hear or see unauthorized, novel, and foreign information, however. It’s that they can now generate their own news, videos, and podcasts. They can write their own software code, develop their own wikis, and start new movements with modest resources.

This is enabling people to assert moral and political claims to global audiences that was previously impossible – and that traditional state and media authorities cannot control. Distributed media technologies have essentially changed the political and cultural ecosystems of individual nations and global culture, often in profound ways.

Naturally, nation-states and multilateral institutions tend to find these developments disorienting and troubling. They may still be able to assert their authority, sometimes with sufficient coercive power to enforce their will. But the legality they invoke is not necessarily the same thing as perceived legitimacy. The latter is more of an open question – a question that national governments may try to influence, but which ultimately only the citizenry can address.

This tension is not going to go away. It is now baked into the very structures of modern telecommunications, the economy, and politics. Indeed, the Trump Administration is largely based on exploiting the tension between new media and legacy state institutions.

I characterize the problem as a deep structural conflict between the centralized, hierarchical, expert-driven institutions of a prior era – and the bottom-up, self-organized, participatory communities made possible by open networks and various apps. The very ideas of centralized state power and shared national identity are under siege when everyone can easily create a diversity of new publics and subcultures on their own terms.

While social media have plenty of proven dangers – fake news, Facebook algorithms, venues for authoritarian populism and hate – let’s remember that open networks – especially when organize as commons – hold some fairly significant creative, productive, and democratic powers. For me, the question is whether state power and multilateral institutions are capable of recognizing and supporting these constructive powers of the commons.

As an activist and policy strategist, I have been studying and working with commons around the world for the past twenty years. I’m not talking about the “tragedy of the commons” that Garrett Hardin made famous in his 1968 essay immortalizing that phrase. Contrary to Hardins claims, a commons does not consist of unowned resources. It is not a free-for-all in which you can take as much as you want.

A commons is a self-organized social system for the stewardship of shared wealth over the long term. It’s a distinctly different form of governance and provisioning than either the market or state. Commoners devise their own rules, social practices, traditions, and rituals that are suited for their particular context and culture. They self-monitor for free-riders and they impose punishments on those who violate the rules.

The commons is not just small bodies of natural resources such as farmland, fisheries, forests, and irrigation water, as studied by the late Elinor Ostrom, who won the Nobel Prize for her work in 2009. The commons also consists of shared management of systems in higher education, in cities, in diverse social settings, and in digital spaces.

Commons are especially robust in the world of free and open source software and Wikipedia; open access journals that are making science and scholarly accessible to everyone; open educational resources that are making textbooks and curricula more affordable to students; and Creative Commons-licensed sharing of everything, bypassing the monopoly rents imposed by the intellectual property industries.

There are many other commons to which I will turn to in a moment. But my basic point is that commons are generative and value-creating, not a “tragedy.” And they are huge potential partners for state and multilateral institutions, if the latter can understand commoning properly.

If we want a world of greater inclusion and participation, and greater freedom in both a political and consumer sense, then we need to be talking about the commons. It is worth remembering Hannah Arendt’s concept of power. She wrote in her book The Human Condition that power is something that “springs up between men when they act together and vanishes the moment they disperse.”

In other words, power does not inhere in our institutions themselves. It must be constantly created and re-created constantly, socially. In this respect, many state and multilateral institutions are losing their struggles to retain power and perceived legitimacy. They are not offering credible, effective responses to urgent societal needs. I’d like to suggest that state institutions would do well to enter into partnerships with various commons to:

1) leverage the generative, creative power that commons can offer;

2) empower peer governance and responsibility among people in ways that can nourish wholesome participation and, indirectly, state legitimacy; and

3) support locally appropriate, stable, self-supporting solutions that affected people can create themselves; and

In other words, state and multilateral institutions need to see the challenge of social media in a much bigger context. It’s not just about clever messaging and better tweets. It’s about developing a deeper modus vivendi with the largely unrecognized power of the commons. This, in fact, is what the French Development Agency has been doing recently as it explores how commons could enhance its development strategies in Africa and other Francophone countries.

So imagine an expansion the Drugs for Neglected Diseases Initiative, DNDi, which is a partnership among commons, state institutions, and private companies to reduce the costs of drug R&D and distribution. DNDi releases medically important drugs under royalty-free, non-exclusive licenses so that benefits so that the drugs can be made available everywhere inexpensively.

Or imagine how the Humanitarian OpenStreetMap Team has helped various states in the wake of natural disasters, such as the earthquake in Haiti. HOT brings together volunteer hackers to produce invaluable Web maps showing first-responders and victims where to find hospitals, water, and other necessities. This is a notable commons-driven solution, not a bureaucratic one.

The System of Rice Intensification is a global open-source community that trades advice and knowledge about the agronomy of growing rice. Working totally outside of conventional multilateral channels, SRI has brought together farmers in Sri Lanka and Cuba, India and Indonesia, to improve their rice yields by two or three-fold.

The King of the Meadows project in the Netherlands is a commons that has mobilized citizens to steward biodiversity connected with cultural heritage. The Bangla-Pesa is a neighborhood currency in Kenya that is helping people exchange value and meet needs without the use of the national fiat currency.

I think you get the idea. If multilateral institutions are going to adjust to the new world unleashed by distributed apps and digital technologies, they should begin by exploring the great promise of commons in meeting urgent needs, giving people some genuine control over their lives, and compensating for the inherent limits of bureaucratic state systems and markets.