Who Owns the Million Dollar Baseball?

Modern capitalism has the conceit that only individual property owners create wealth and they therefore deserve all the rewards.It cannot comprehend the idea that commoners and commons create value. Fortunately, a brilliant young cartoonist from Canberra, Australia, Stuart McMillen, clearly explains the collective origins of wealth through a wonderful extended comic strip. It is a parable involving collective moral claims on a World Series baseball that, by extension, exposes the self-delusions of people who believe they are "self-made."

I just learned that the comic is based on a blog post that I produced with my friend, the late Jonathan Rowe, in 2010 -- “The Missing Sector: Enlarging Our Sense of ‘the Economy’” – in which we reflected on a controversy that arose after the 2004 World Series. After making the final 'out' in the last game of the series, a player for the Boston Red Sox quietly kept the baseball, knowing that he could sell it for millions of dollars and profit personally. The team’s victory was historic and sweet because it was the Red Sox’s first World Series victory in 85 years. But that sense of elation curdled when it was learned that first baseman Doug Mientkiewicz had pocketed the game-winning ball and refused to surrender it.

This story prompted Jon and I to reflect on the basic question, Who creates wealth? Who exactly created the monetary value of that ordinary ball, and why should the person who just happened to be holding it at the end of the game be entitled to all its value?

Stuart McMillen explores these questions in his magnificent 56-page cartoon, “Who Owns the Million Dollar Baseball?” It wasn’t the player Mientkiewicz who somehow made an ordinary baseball worth a million dollars or more. He was just the lucky guy who made the last ‘out’ of a seven-game World Series following a baseball season of 176 games, producing the first World Series victory after 85 luckless seasons.

McMillen’s strip notes how the entire team won the three other games in the seven-game series, and how the fans had loyally supported the team for generations. The cartoon notes that the City of Boston and State of Massachusetts, played an indirect role by providing streets, electricity, sewer and other infrastructure for the Fenway Park stadium in which the Red Sox play.

In our blog, Jon Rowe and I wrote:

The value of a business, resource, historic baseball or whatever does not reside solely in the thing. Nor does it arise from the efforts of an entrepreneur alone. Value is, rather, a co-production between an individual, society and nature; and the latter two often play the larger part. Land values, for example, are almost entirely a social product. That’s why two acres near an urban freeway exchange or subway stop can fetch more than does an equal amount of land in the middle of a desert.

The question is less what the owner did, than what others did around him, individually and through government. So, too, with music, inventions – just about everything. These accomplishments draw on what was done before, and depend on the sustaining presence of society as a whole. Even stocks would have little value without stock markets through which to sell them, and without governments to police – to some degree – those markets. These are social creations all.

Once we acknowledge the social component of economic value, then discussion of financial return and social policy take a new turn. Taxation, for example, no longer is a matter of “redistributing” someone else’s income, or wealth, but rather of restoring a portion of it to the rightful owners. The acknowledgment of social co-production also dissolves the myth of the heroic individual businessman or woman as “self-made.” Individuals may do great things, but as Warren Buffett – who knows something about making money – has pointed out, none do it alone.

Stuart McMillen’s strip makes these points wonderfully vivid. In an accompanying blog post, he elaborates on the public factors that contribute to individual success. His "self-made" executive bears a striking and deliberate resemblance to Jeff Bezos of Amazon, the world's richest man.

McMillen's principal interests are environmentalism, post-growth economics, and human psychology, but he also deals with such diverse topics as Buckminster Fuller, religion, energy, and drugs. He supports himself through a crowdfunding page at which 169 individuals have so far pledged a cumulative US$1,223 per month. He aspires to be the first crowdfunded Australian cartoonist to earn a median income for his country. You can contribute to his work at the crowdfunding site Patreon.

By the way, a shamed first baseman Mientkiewicz eventually agreed to return the ball so it could be put on display. It was an implicit acknowledgment that the Red Sox's success in the World Series stemmed from many sources generously working together. 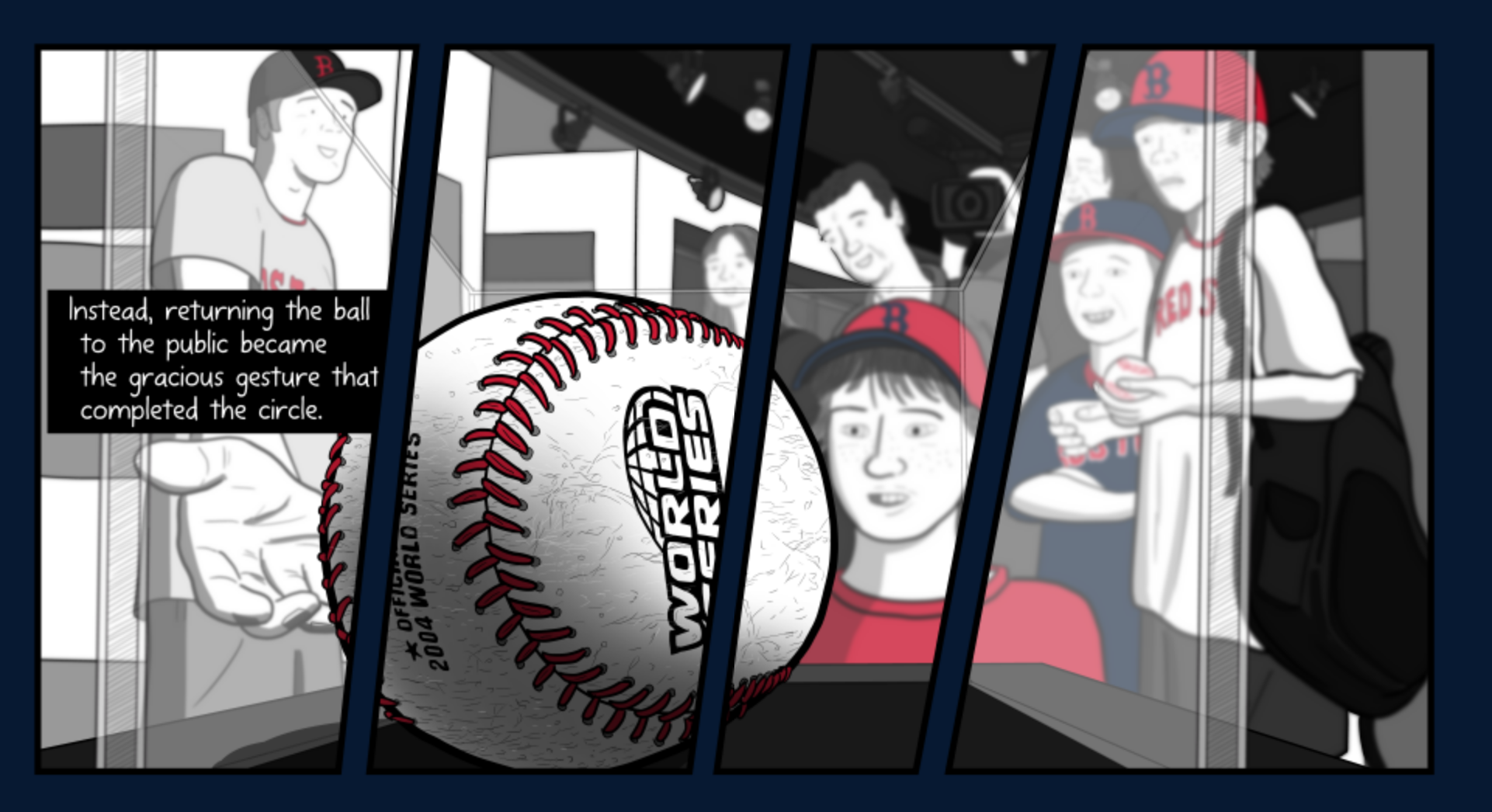