As befits our time of converging existential crises, a number of new anthologies of essays are popping up to make sense of how modern industrial society got here and to propose coherent strategies for moving forward. Today I’d like to call attention to a fantastic collection of 29 original essays, The New Systems Reader: Alternatives to a Failed Economy, edited by James Gustave Speth and Kathleen Courrier and published by Routledge. 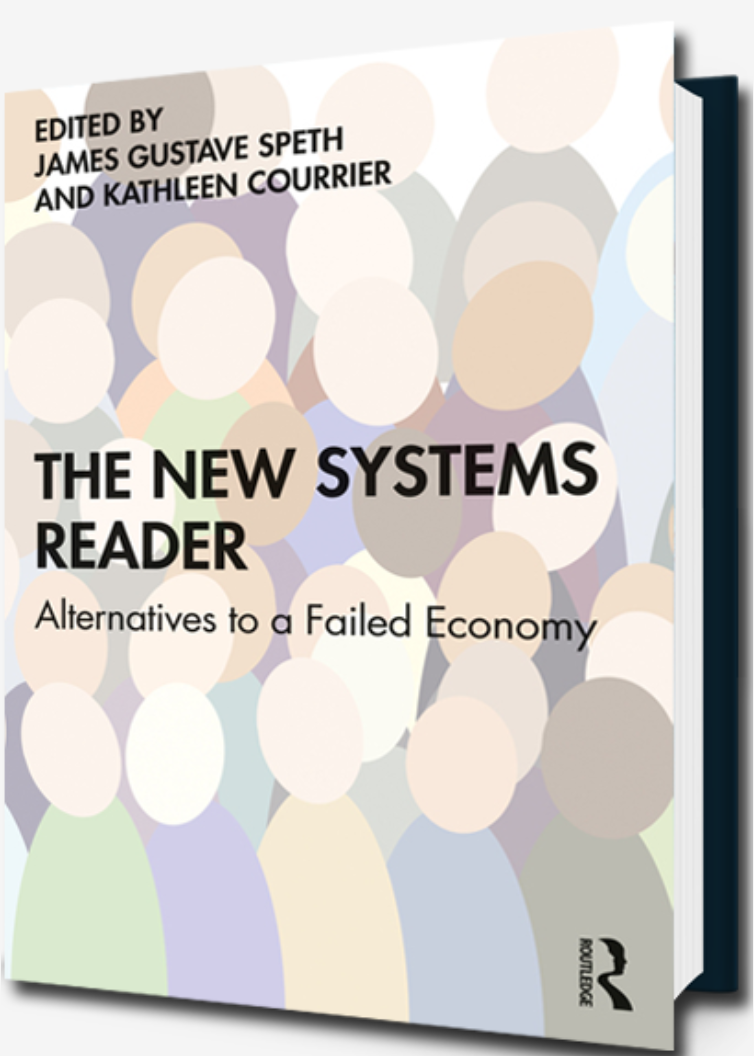 Chapters cover a wide gamut of topics: social democracy and radical localism, the elements of a new, green economy, worker democracy, the Solidarity economy, cooperatives, participatory economics, reparative economics, and much more. (I have my own chapter on commoning as a transformative social paradigm.)

The Next System Project is an initiative of the Democracy Collaborative, which has long been showcasing the best research and strategic thinking about "visions, models and pathways that point to a 'next system' radically different in fundamental ways from the failed systems of the past and present...." So it's a pleasure to have so many diverse voices consolidated into a single volume.

Michel Bauwens and Vasilis Kostakis have just published a new book that offers a rich, sophisticated critique of our current brand of capitalism, and looks to current trends in digital collaboration to propose the outlines of the next, network-based economy and society.

Network Society and Future Scenarios for a Collaborative Economy is a scholarly book published by Palgrave Macmillan. If you’d like to look at a working draft of the book, you can find it online here.

Bauwens is the founder of the P2P Foundation, and Kostakis is a political economist and founder of the P2P Lab. He is also a research fellow at the Ragnar Nurkse School of Innovation and Governance at Tallinn University of Technology, Estonia.

The aim of this book is not to provide yet another critique of capitalism but rather to contribute to the ongoing dialogue for post-capitalist construction, and to discuss how another world could be possible. We build on the idea that peer-to-peer infrastructures are gradually becoming the general conditions of work, economy, and society, considering peer production as a social advancement within capitalism but with various post-capitalistic aspects in need of protection, enforcement, stimulation and connection with progressive social movements.

The authors outline four scenarios to “explore relevant trajectories of the current techno-economic paradigm within and beyond capitalism.” They envision the rise of "netarchical capitalism," a network-based capitalism, that sanctions several types of compatible and conflicting forms of capitalism – what they call “the mixed model of neo-feudal cognitive capitalism.”  There are variations that are possible, including "distributed capitalism, resilient communities and global Commons."

No respectable person in American politics dares to question the virtue of economic growth even though it is increasingly clear that life on Earth will collapse if current patterns of extraction and consumption continue.  So what is the responsible path forward?

It was exciting that the Institute for Policy Studies in Washington, D.C. decided to host a two-hour webinar to explore this topic two weeks ago.  The dialogue – “A Deeper Look at the Limits to Growth:  Looking Beyond GDP Towards a Post-Growth Society” – amounted to dipping a toe into the water rather than a confident plunge.  But for Americans, who woefully lag behind European activists on this topic, it was a welcome attempt to get beyond conventional political stances.

Economic growth is always touted as the absolute precondition for greater social justice or environmental progress.  Yet somehow growth never really translates into sustainable gains for the environment or fairer allocations of rewards.  Nonmarket goals are always a receding chimera, an afterthought, a political football.  On the other hand, it is equally true that criticizing economic growth is a sure-fire way to be politically marginalized in American public life.  That's a real problem, too.

The IPS webinar sought to probe the “fundamental rift between traditional progressives over the future of economic growth.  One segment argues that ecological limits dictate that the economic growth paradigm that we know is over…..Other progressives argue we should pursue growth policies -- or even ‘green growth’ -- and not concede that we are ‘anti-growth.’”

Here is how IPS introduced the webinar:

Is there a way to “redefine growth” that doesn’t politically concede limits to growth? (After all, conventional wisdom say no politician will win on a degrowth program). Is there a common framework that can unify both of these movements that address both of these group’s deep systemic concerns?

In the past, organized labor and environmentalists have gamely attempted to find a common ground – a “blue/green alliance” – that would push for higher wages and stronger environmental protection at the same time.  Such projects have been a valiant effort to force capital to internalize its negative externalities (pollution, habitat destruction, etc.) and allocate the benefits of growth more equitably.