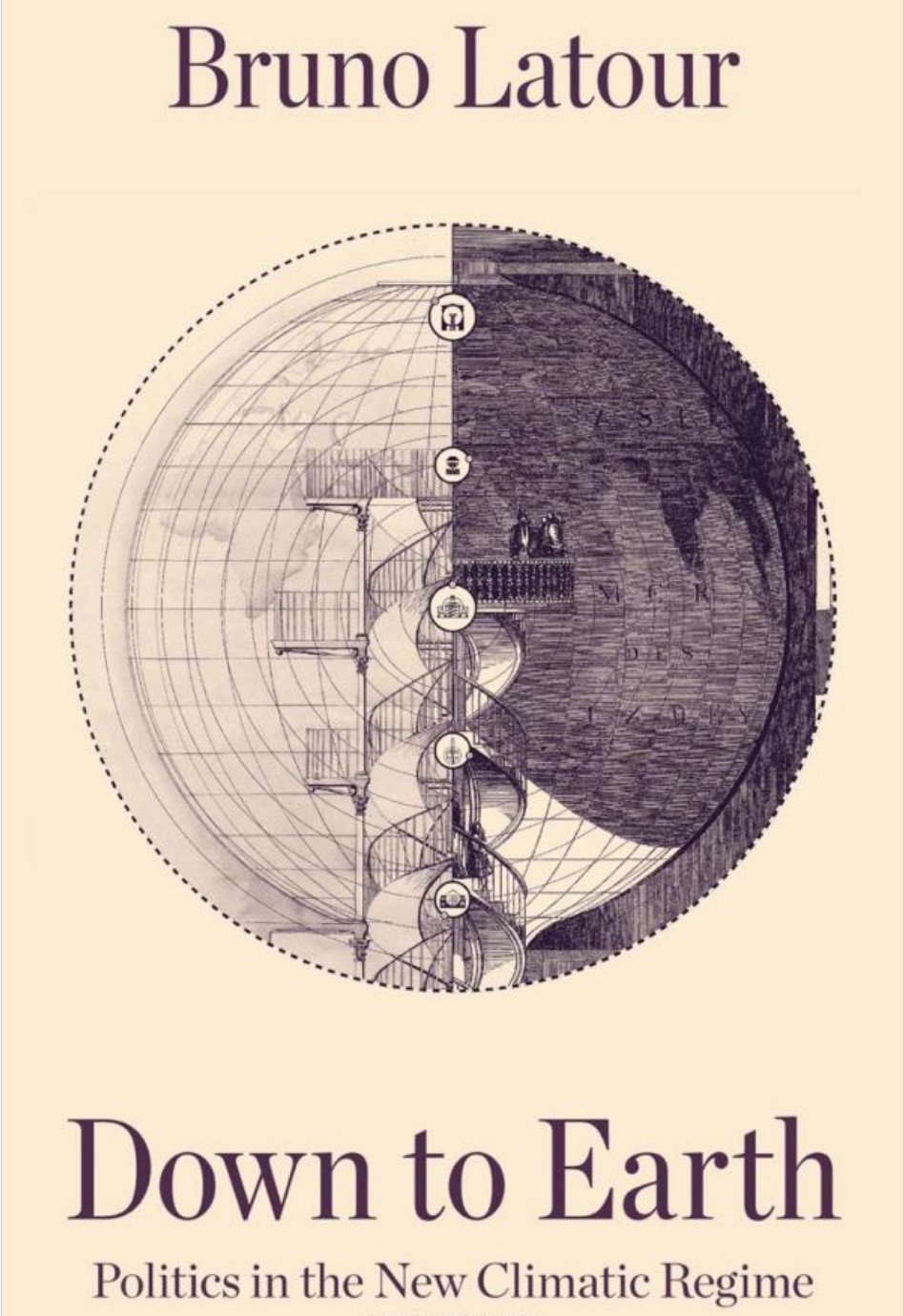 Donald Trump arguably triggered our deep epistemological confusion when he withdrew the US Government from the Paris Climate Accord, Latour argues. By declaring that the US will continue on the same path as it has for decades, with no changes in American lifestyles or reductions in carbon emissions, he was in effect declaring war on the rest of the world.

Or as Latour puts it, “We Americans don’t belong to the same earth as you. Yours may be threatened; ours won’t be!” Trump’s move officially ratified a mindset that President Bush I expressed so bluntly in 1992: “Our way of life is not negotiable!”

Down to Earth is a powerful look at how climate change is changing the tectonic plates of politics, economics, and culture. As the claims of modernity and globalized capitalism fall apart, revealed as ecologically and economically catastrophic, it has opened up an empty space that we don't know how to fill. Latour brilliantly dissects why our epistemological delirium is happening, how it is transforming politics, and what a new paradigm might look like.

The coming shift is not simply a story of external institutions and nation-states; it’s mostly about our inner conceptualizations about the world and aspirations. For centuries, the Global, or modernization, has stood for scientific, economic, and moral progress. It later erected “the Local” to serve as a useful foil, a way of life that the Global helps us escape.

Modernization has meant progress, profit, development, innovation, and civilization -- an escape from the Local, which situates our identities with secure geographic boundaries, ethnicity, and tradition. Modernity has positioned itself as “leaving our native province, abandoning our traditions, breaking with our habits, if we wanted to ‘get ahead,’ to participate in the general movement of development, and, finally, to profit from the world,” writes Latour.

The Local has served as a cautionary counterpoint -- an impoverished realm of “the antiquated, the vanquished, the colonized, the subaltern, the excluded," says Latour. "Thanks to that touchstone, one could treat them unassailably as reactionaries, or at least as anti-moderns, as dregs, rejects. They could certainly protest, but their whining only justified their critics.”

Modernization has thus made “attaching oneself to a particular patch of soil” as antithetical to “having access to the global world.” One must choose between the two of them.

And so humanity has aligned itself with the ideals of global modernization, the grand project of moving forward in alliance with capitalism. Everything else is cast as lamentably premodern and backward-looking, a zone waiting to be properly modernized.

Defining modern life around these two poles of attraction may be coming to an end, Latour argues, saying “we have reached the end of a certain historical arc.” The onset of neoliberal policies in the 1980s marked a turning point for this change. Elites decided they were going to secede from the world, in effect, by privatizing wealth for themselves at the expense of sharing society and the polity with everyone else. This agenda is epitomized by Ronald Reagan, Margaret Thatcher, the Koch brothers, and the whole cast of neoliberal think tanks, PACs, Davos, survivalist billionaires, and more.

The Local – long the site of colonialist extraction – continues to be seen as “a rump territory, the remains of what has been definitely left behind by modernization.” While political movements have exploited sentimental notions of the Local using nationalist, authoritarian appeals – e.g., Trump, Brexit, Duarte, Bolsonaro, the National Front – these visions are ultimately cynical charades – attempts to capitalize on nostalgic, nativist reactions to the Global and its failures to deliver safety and security.

As the Global/Local framing of human development has fallen apart, Latour writes, it has exposed how neither is truly connected to the biophysical realities of the earth:

The terrifying impression that politics has been emptied of its substance, that it is not engaged with anything at all, that it no longer has any meaning or direction, that it has become literally powerless as well a senseless, has no cause other than this gradual revelation: neither the Global nor the Local has any last material existence.

Both are human projections, consensus fictions with little grounding in ecological realities. Climate change is blowing apart the fantasy of the Global as a realm of infinite possibilities and material extraction. It is also shattering the idea of the Local as a haven of sequestered safety, morality, and order.

What has propelled this change, says Latour, is that the earth itself is becoming a political agent. The earth can no longer be ignored as a powerful autonomous, living force in human affairs. This is making the grand project of modernization/development increasingly problematic because the finite and dynamic character of the earth is becoming quite visible, painfully so. Who can rally around the idea of modernization as a political project when its absurdly utopian dimensions and costs are increasingly plain to see?

Latour argues that a new “third attractor” is gradually arising to harness political energies and revamp political alignments.The new attractor is based on a commitment to healing the earth and changing the dynamics of politics itself. The new vision, still emerging, is “perpendicular” to the Global/Local axis in the sense that it steps away from the arc of history plotted by capitalist modernization. It recognizes the gritty imperatives of living ecosystems and calls for a “sideway” shift of attention, energy, and innovation -- a new narrative of the future.

This shift is occurring, says Latour, because earth systems are discrediting the idea of the world as a vast, limitless, and inert empty space in which human affairs take place. The Enlightenment idea that humanity and “nature” are separate entities is no longer tenable. As Latour notes, “How are we to act if the territory itself begins to participate in history, to fight back, in short, to concern itself with us – how do we occupy a land if it is this land itself that is occupying us?” (Paging John Locke….)

In short, climate change is mooting many of the premises of modern consciousness itself. It is incubating a new attractor to organize our energies and imaginations. This attractor escapes the fantasies of the Global and Local by frankly recognizing the biophysical realities of the living earth as our destiny and mission. Humanity’s relationship to the earth becomes paramount. Latour decides to provisionally name this attractor “The Terrestrial.”

There is much else that Latour shares in his short book (at 106 pages, a long essay) that clarifies the macro-challenges we face in the coming years. Although he doesn’t mention the commons, it’s clear to me that the commons enacts Latour’s idea of the Terrestrial. Throughout the book, he cites the need for humanity to find “a place to land” – a way to escape the fantasies of modernity and to become more entangled with the biophysical life of the earth.

That’s what commons do! The commons has an ancient pedigree of being very “down to earth.” I think the commons holds great potential for serving as a new attractor for re-imagining life, politics, economics, and consciousness, in synergy with the Terrestrial. But how to hoist up this attractor and give it dynamic scope?

I suppose it takes a distinguished scholar of modernity to know how to critique modernity with such acuity and question some of its fundamental premises. By stepping outside of the conventional frames of discussion about climate change, Latour opens up a rich, grand structure for thinking about the future of politics in the Anthropocene. Now if only we can build out this new third attractor. Let us call it the Terrestrial Commons!