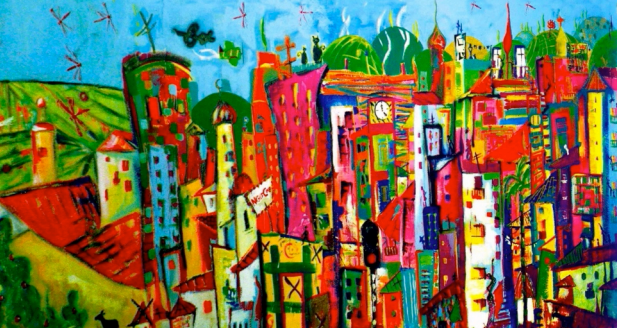 “The current crisis facing the European Union demands new, unifying and constructive narratives.  The commons is an emerging paradigm in Europe – one that embraces reciprocity, stewardship, social and ecological sustainability. It is also a movement, one that can reinvigorate progressive politics and contribute to a more socially and ecologically sustainable Europe.

“….The commons perspective stands in stark contrast to the policy priorities that currently dominate in Europe,” they add, citing “individualism, private ownership and zealous free market-thinking” and the “major fault lines [that] are starting to appear in that dominant worldview….At the moment, almost all EU economic policy is focused on the promotion of purely commercial actors and the uni-dimensional view of people having the exclusively individual aims of selling, owning or buying goods or services. The dominant paradigm is rarely evaluated by applying clear indicators of social and ecological well-being to judge the success of an economic endeavour.”

It remains to be seen whether politicians will want to explore and develop a commons framing or try to re-imagine politics. The right has generally seen more advantage in striking an angry, reactionary pose against immigrants and elites, while the left generally sees few alternatives than to try to humanize the neoliberal agenda using old-style bureaucratic systems and more government money.

However, there are some fascinating new attempts to develop a pan-European approach to democratic renewal, as seen in the DiEM 25 project and the European Commons Assembly, among other initiatives. The Commons Network report is an attempt to outline the logic, ethic and social practices of a new kinds of politics, with a focus on several promising policy areas such as participatory democracy, the urban environment and knowledge in the digital environment.

“Commons…stand for a worldview and ethical perspective favouring stewardship, reciprocity and social and ecological sustainability. This outlook defines wellbeing and social wealth not in terms of narrow economic criteria like GDP or companies’ success. Instead it looks to a richer, more qualitative set of criteria that are not easily measured – including moral legitimacy, social consensus and participation, equity, resilience, social cohesion and social justice.

“The commons discourse considers people as actors who are deeply embedded in social relationships, communities and local ecosystems, instead of conceiving of society as merely a collection of atomised individuals principally living as consumers or entrepreneurs. Human motivation is more diverse than maximising self-interest alone: we are social beings and human cooperation and reciprocity are at least as important in driving our actions.  This holistic perspective also tends to overcome dominant subject-object dualisms between, for example, man and nature, and to consider human activity as part of the larger biophysical world. Recognising the multiple domains of people’s lives, these bottom-up, decentralised and participatory approaches to our major social and environmental dilemmas provide functional solutions to the crises facing our continent.

“…..New social values and practices are enabling communities to be generative instead of extractive, outside of the market and state. This is creating a new civic and cultural ethic that is breaking with conventional notions of citizenship and participation. The regeneration activities of commoners showcase, above all, cultural manifestations of new ways of daily life. Community supported agriculture, cooperative housing initiatives that ensure reasonable and lasting low rents, local energy cooperatives, do it yourself (DIY) initiatives, decentralised internet infrastructures, the scientific commons, community-based art, music and theatre initiatives, and many other activities, all provoke practical on-the-ground cultural change.”

There is a cultural shift going on at the ground level, mostly outside the view of conventional electoral politics. But since politicians are averse to wading into new and unfamiliar lines of discussion – oh, the risks! – it is likely that the cultural rumblings will first burst out in the style of Occupy, the Indignados or the Arab Spring: an abrupt surprise. We may have to wait for a cultural paroxysm for political leaders to develop the courage to think big and be bold.

The sick thing is, Trump actually understood these deeper shifts. He just chose to exploit widespread resentments and frustrations in all sorts of manipulative, demagogic and self-serving ways. When will the pragmatic realists of the left and center begin to see the virtues of embracing the coming paradigm shift, and champion a humane social reconstruction?