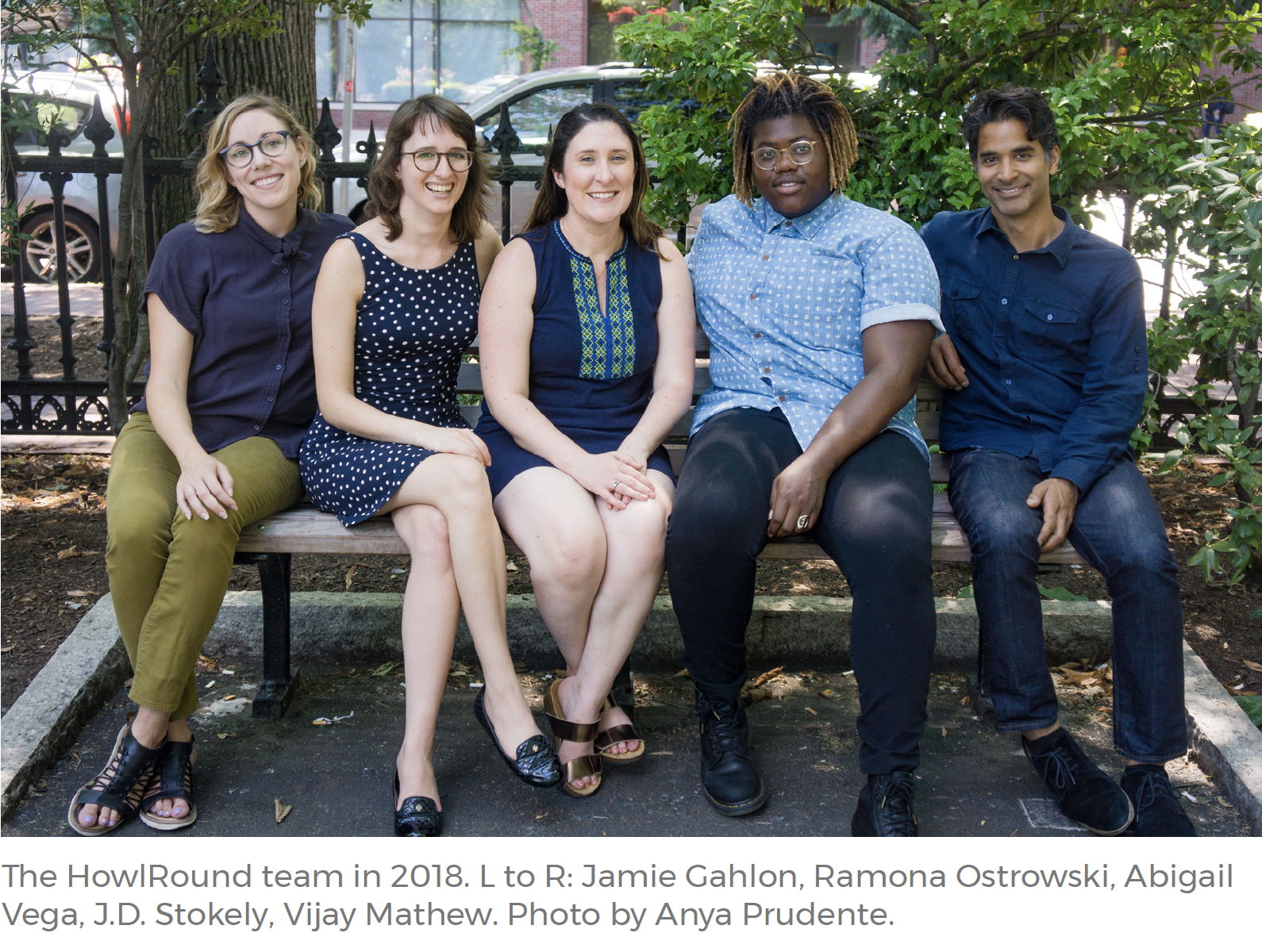 HowlRound got its start when a number of theater people became alarmed at the economic and artistic pressures squeezing nonprofit, regional, and community theater in the US. Even though lots of great plays and performances were being staged by small nonprofits and community troupes across the country, most of the funding and attention were going to the large, established theaters, which of course were and are serving older, whiter, wealthier audiences. In this context, nonprofit theater was increasingly becoming a knock-off of mainstream commercial theater, with blockbuster shows, big stars, high ticket prices, and upscale theater-goers.

The founders of HowlRound – David Dower, Jamie Gahlon, Vijay Mathew, and P. Carl – realized that these problems were not a special problem of live theater alone. They are symptoms of capitalism itself. As Frasz and Sidford write: “Our current era is characterized by concentration of power and wealth in the hands of a few; exploitation of workers for low wages; systemic barriers to opportunity and resources, magnified along class and racial lines; underfunded public and social goods and services; and commodification of everything for corporate profit."

In short, noncommercial theater was/is being eclipsed if not enclosed by capitalism. It has become harder to pursue serious artistic work and cultural projects when power and attention are so relentlessly fixated on commercial success. Even excellent nonprofit theater can barely pay the bills.

The original founders of nonprofit theater realized that theater is not really meant to be a profit-making activity. Zelda Fichandler, who cofounded the Arena Stage in Washington, D.C., wrote, “The thought that propelled us was the theatre should stop serving the function of making money, for which it has never been and never will be suited, and start serving the revelation and shaping the process of living, for which it is uniquely suited, for which it, indeed, exists.”

At first, HowlRound was primarily an online journal that let innovative and geographically isolated artists be heard, and to hear each other. Discussions that once occurred in the shadows of the theater world soon had a prominent online showcase. A livestreaming TV channel was started for anyone to share content, such a conference panels and live theater.  An online map compiled a master database of all new plays being staged anywhere in the US, making exciting new creative works visible for the first time. HowlRound also convened in-person events to deepen discussions and build new relationships.

The commons became an organizing principle at HowlRound because its founders realized that theater, at its core, is a collaborative endeavor that should be widely shared. But HOW to build out a commons philosophy in practical, operational ways is a difficult challenge. Fransz and Sidford write: “HowlRound realized early on that operationalizing commons values would require intentionally rewiring organizational structures and behaviors, or else dominant values would be perpetuated by default.”

P. Carl and Vijay Mathew said, “We had to rethink our notions of conventional branding, identity, and behavior. If we are going to become stewards and stakeholders of a collectively shared commons, along with thousands of other organizations and artists in our field, we have to start thinking of ourselves as a ‘We” and no longer as a ‘Me.’”

After seven years of working with these challenges, HowlRound officially rebranded itself as a “Theater Commons” in 2018. Its stated mission is to provide “a free and open platform for theatre-makers worldwide that amplifies progressive, disruptive ideas about the art form and facilitiates connection between diverse practitioners.”

The group sees itself as an infrastructure and support system for enabling users to engage in acts of commoning.  HowlRound staff see themselves as community organizers, facilitators and system designers.

In the broad sweep, the organization has had significant impact in:

1) “making the whole more visible,” so that previously neglected artists, theater practices, aesthetics, venues, and cultural contexts could be made visible;

2) “providing a structure for organizing,” so that, for example, efforts to increase diversity in theater could challenge the standing hierarchies and norms;

3) “democratizing access to knowledge,” so that HowlRound’s large archive of theater-related materials (essays, videos, documentation about convenings, etc.) could be available to anyone via the internet; and

4) “spreading the commons philosophy and practice,” so that the logic and ethos of HowlRound can be made more explicit an understandable.

Frasz and Sidford introduce their report with a quote from Ursula Le Guin that has inspiration for many areas well beyond theater: “We live in capitalism. Its power seems inescapable. So did the divine right of kings. Any human power can be resisted and changed by human beings. Resistance and change often begin in art, and very often in our art, the art of words.” Check out the report, an excellent read!