The Mushroom at the End of the World

In a world that is falling apart (no further elaboration needed), how shall we understand the dynamics of survival and collaboration?  How does life persist and flourish in a world that is hellbent on commodifying and privatizing every aspect of human relations and the natural world?

For anthropologist Anna Lowenhaupt Tsing, the answer is to study the strange life of the humble matsutake mushroom, which tends to grow in North America but is a prized delicacy in Japan.  The social and commercial systems by which the mushrooms are harvested, sorted, transported and sold – blending gift economies and global commodity-chains in the process – hold some penetrating insights into contemporary capitalism. 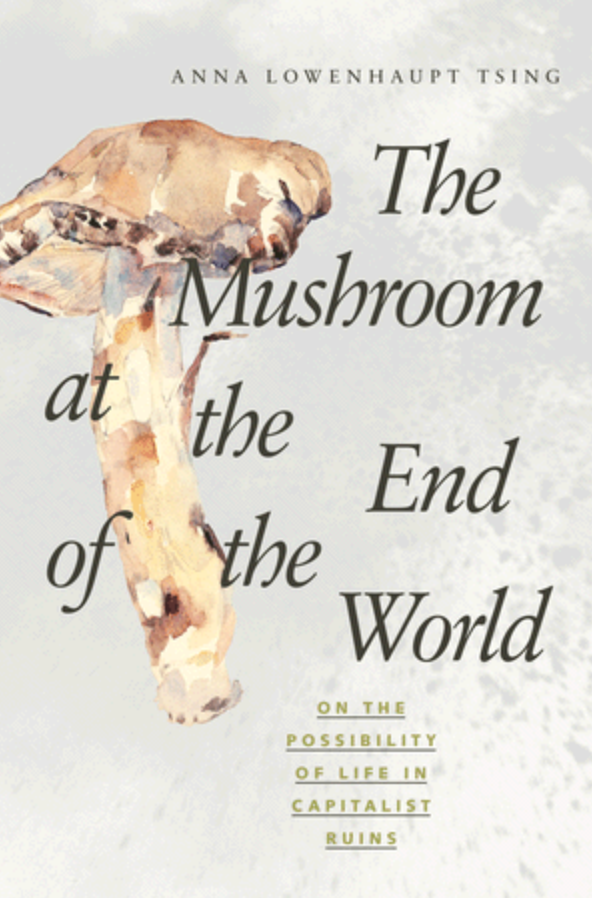 Tsing, a professor at the University of California, Santa Cruz, tells this story in The Mushroom at the End of the World: On the Possibility of Life in Capitalist Ruins (Princeton University Press, 2015).  The book bills itself as “an original examination into the relation between capitalist destruction and collaborative survival within multispecies landscapes, the prerequisite for continuing life on earth.” It’s a brilliant premise: explore the deep dynamics of capitalism by telling the unusual ecological life and commercial journey of a mundane fungus.

The book is a wickedly wonderful ethnography. The matsutake mushroom is not just a metaphor for showing how this mushroom species devises strategies of survival for itself (in this case, entering into a symbiosis with trees and other plants and microbes); the mushroom is a partner of sorts with humans who take, steal, gift and sell it in various contexts.

Why so much attention to matsutake, a wild mushroom that cannot be grown in captivity?  Because Tsing sees it as a proxy for the fate of human beings in today’s near-ruined world. The hardy, resourceful mushroom tends to grow in disrupted ecosystems and ruined landscapes -- just as billions of people around the world must now scrape out an existence in the face of ubiquitous, often-predatory capitalist systems and blighted environments. As a subterranean fungus of northern landscapes, matsutake play a valuable role in helping trees grow in forbidding locations. You might say that mushrooms are experts in dealing with precarity.

Oddly enough, so are the people who harvest the mushrooms.  Matsutake foragers in the US Pacific Northwest tend to be refugees from Laos and Cambodia, American veterans, and itinerant poor people. They either can’t get regular jobs or don’t want them, preferring the “freedom” of being on their own in the open spaces of nature.

“Mushroom foragers work for themselves,” writes Tsing. “No companies hire them. There are no wages and no benefits; pickers merely sell the mushrooms they find. Some years there are no mushrooms, and pickers are left with their expenses. Commercial wild-mushroom picking is an exemplification of precarious livelihood, without security.”  After a harvest in Oregon, say, the mushrooms are bought by pop-up wholesalers who ship them promptly to sorters, who classify them and export them to Japan, where a large and ready market of high-end customers eagerly buy them, usually to give as gifts.

Tsing rejects rejects the standard narratives about “progress” that tend to be the axis for understanding the future, in both capitalist and Marxist accounts Instead, in an analysis appropriate for our time, Tsing presents to us a capitalism of “disturbance-based ecologies in which many species sometimes live together without either harmony or conquest.”

Studying the mushroom trade is illuminating because it shows how investors commodify everything today and treat people and elements of nature “as if the entanglements of living did not matter. Through alienation, people and things become mobile assets; they can be removed from their life worlds in distance-defying transport to be exchanged with other assets from other life worlds, elsewhere.” Tsing’s primary message is that the whole “progress narrative” has been supplanted by a messy patchwork of precarious survival: the very life-strategy used by matsutake mushrooms.

Global supply chains ended expectations of progress because they allowed lead corporations to let go of their commitment to controlling labor. Standardizing labor required education and regularized jobs, thus connecting profits and progress. In supply chains, in contrast, goods gathered from many arrangements can lead to profits for the lead firm; commitments to jobs, education, and well-being are no longer even rhetorically necessary.  Supply chains require a particular kind of salvage accumulation, involving translation across patches. The modern history of U.S-Japanese relations is a counterpoint of call-and-response that spread this practice around the world.

Tsing rejects the idea of a comprehensive, unitary critique of capitalism, arguing instead that the world is full of “patchiness, that is, a mosaic of open-ended assemblages of entangled ways of life,” which the capitalist growth-paradigm obscures. Tsing accordingly presents the reality of precarity – for both mushrooms and people – in all their particularity and ephemerality. Living things are not fungible parts of machines; they are singular and improvisational -- something our critiques ought to acknowledge. Contemporary capitalism certainly recognizes this reality by “translating” the local and peculiar into usable inputs for ongoing capital accumulation.

Tsing wishes to show that no single rationality can begin to describe today’s economy, where “supply chains snake back and forth not only across continents but also across standards…” Not only are supply chains wildly heterogeneous, they often rely upon non-capitalist social forms, much as Facebook relies upon social sharing and Airbnb and Uber have colonized people’s private lives by marketizing their apartments and cars. For Tsing, “capitalist and noncapitalist forms interact in pericapitalist spaces.”

Despite the messy contingencies of this arrangement, capitalism still manages to amass assets for further investment.  “How does this work?” Tsing asks. The short answer is that capital accumulation proceeds through a process of “salvage accumulation”:

Civilization and progress turn out to be cover-ups and translation mechanisms for getting access to value procured through violence: classic salvage.”  In today’s global supply chains, this means “coerced labor, dangerous sweatshops, poisonous substitute ingredients, and irresponsible environmental gouging and dumping.

The Mushroom at the End of the World is no dry social-sciences monograph; in its poetic expressiveness and subtle depictions of social reality, the book often reads like a novel. There are no tidy conclusions, just a series of penetrating vignettes, analyses and observations. The ultimate point is to open up a new grand narrative. Once we can get beyond the stark divide of “Man” and “Nature” as dual opposites, Tsing writes:

all creatures can come back to life, and men and women can express themselves without the strictures of a parochially imagined rationality. No longer relegated to whispers in the night, such stories might be simultaneously true and fabulous. How else can we account for the fact that anything is alive in the mess we have made?

If The Mushroom at the End of the World describes the survival techniques of precariat mushroom foragers working under capitalism -- a story of ingenuity, commitment and proud autonomy -- the next step is to tell more of the stories of how precariat commoners are emancipating themselves through commons. Tsing is right: once the market/progress narrative is exposed as a cover-story, a range of different narratives become possible.

Indeed a beautiful book, what about this one?

If you're interested in an another anthropology book that goes beyond market-thinking (and even beyond gift-exchange), I would recommend recommend Thomas Widlok's book 'Anthropology and the Economy of Sharing' published with Routledge. Here: https://www.routledge.com/Anthropology-and-the-Economy-of-Sharing/Widlok...

As one reviewer says people too often assume all non-market modes of distribution to be forms of gift exchange or reciprocity. Anthropology and the Economy of Sharing shows just what is lost in this sloppy assumption -- particularly, an appreciation of the crucial conceptual and political alternatives that are opened up by social practices of sharing.