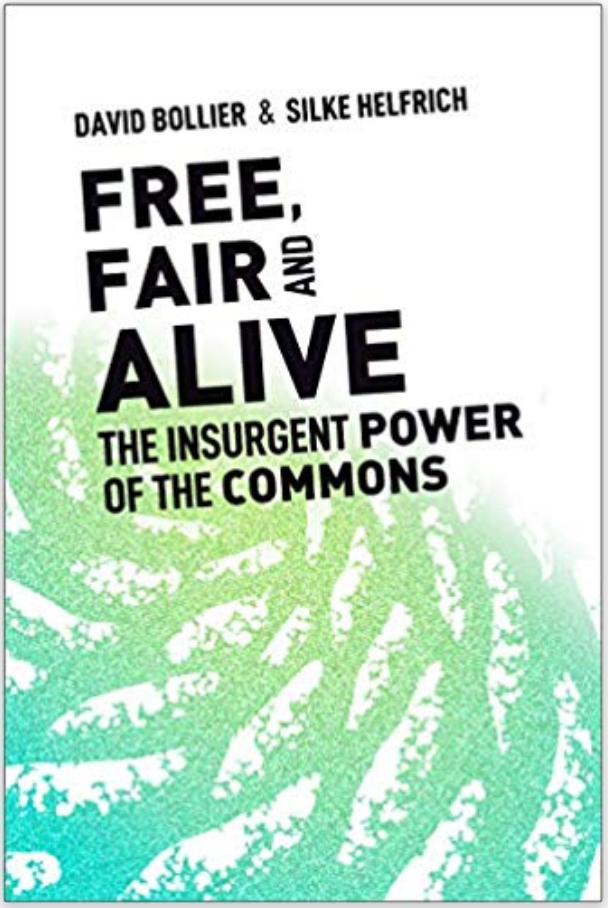 Once we realized the ways that we had to escape the gravitational pull of many existing terms and concepts, we set about inventing a new language that could express the realities of cooperating and sharing. In short, a relational framework for the commons. Video producer Nils Agilar captured a glimpse of our process in a wonderful promotional video that he produced. It shows a brainstorming session in which Silke and I came up with a new term to describe what really goes on in a knowledge commons.

For half of my book tour, I traveled with Silke -- to London and a number of other cities in England, and to Amsterdam and Brussels. We encountered Ph.D. students in Amsterdam who hope to build a new international network of graduate students who study the commons. In a separate workshop, I learned how many civic groups in Amsterdam are keen to develop new forms of commons-based finance.

At a Brussels event hosted by Oikos think tank and the Heinrich Boell Foundation, we learned how the commons perspective is gradually working its way into politics. Lotte Stoops, a politician in the Brussels Parliament, is attempting to bring the commons into political and policy discussions there.

In Bristol, England, I met up with some activists with the Transition movement and permaculture world who find great inspiration in the commons. Some Marxist-minded respondents to my talk at The Cube Theater argued that commoners need to pay more attention to class struggle. (Here is a video of my talk and the Q&A in Bristol.)

I had a great evening in London hosted by the Gaia Foundation, which brought together a sizeable contingent of area commoners. Another event, hosted by the Institute for Global Prosperity at University College London, dove into some conversations about art and commoning with the help of the Furtherfield Collective.

Returning to the US, HowlRound Theatre Commons at Emerson College in Boston hosted my presentation and an evening’s dialogue about the role of the commons in the work of artists and cultural workers. By happenstance, I also met up with an Italian student who is an expert on water commons – which gave me a quick tutorial on some latest developments in European and US water commons.

My visit to Boston also brought me into conversation with members of the Leland Street Co-operative Garden in Jamaica Plain ("Tended by All, Harvested by All"), for a potluck dinner in the waning light of a chilly autumn evening. That was an inspiring visit!  People in the neighborhood had personally reclaimed a space that had been used for years as an illegal dumping ground. With some loving care and hard work, the neighborhood turned it into a lovely oasis in the noisy city.

I participated in other memorable events, including the spirited “Race, Grace, and the Renewal of the Commons” literary festival in Virginia; an activists' luncheon at Ralph Nader’s headquarters hosted by several progressive advocacy groups; conversations with students at Middlebury College and Hampshire College; and an evening with the good folks of Vermont Family Forests in Bristol, Vermont.

I wish to thank the many generous hosts of my talks over the course of my book tour. I also want to salute a number of publications and media outlets that gave some wonderful exposure to Free, Fair and Alive. Shareable magazine named the book as the first of “eleven books we’re reading this fall.” It also did a later Q&A with me about the commons.

The group blog Boing Boing published a nice essay by Silke and me, “Learning to See the Commons,” which served as a nice bookend to another Boing Boing piece about Garrett Hardin and the rise of ecofascism.

Francesca Rheannon, the velvet-voiced radio show host, interviewed me on “Writer’s Voice," And the new "Commonscast” podcast featured an interview with Silke and me.

As if all this were not enough, you can learn more about the book itself on its website, where we will soon be posting a new, complete chapter every few weeks. This is possible only because Free, Fair and Alive is licensed under a Creative Commons Attribution-ShareAlike license. A big thanks to New Society Publishers for having the calm confidence in moving forward with a CC license for a commercial book.

A German version of the book was published by transcript Verlag in April, and is expected to go into a second printing in January 2020. A Spanish translation is underway with the help of Guerrilla Media Collective, which also gave us a big boost in outreach and marketing. We have also entered into long planning conversations for possible editions in several other languages.

Long planning sessions are needed because, while there are no foreign rights to buy (because of the CC license), a simple translation is not enough. There are too many novel terms in our book that will require native commoners to come up with creative equivalents. Any translation will also require the insertion of country-specific examples and cultural references so that the text will really resonate with readers. In a sense, each edition in another language will be an adaptation as well as a translation: a “transladaptation.”

It was a long time on the road, but it was a fantastic set of conversations! My hope now is that the book will take on a life of its own.