The Birth of a Poop/Drug Cartel?

I’ve always been amazed at the things and activities around which commons have been unexpectedly developed – noncommercial theater, humanitarian rescue maps, specialized scientific microscopes. Little did I suspect that I would encounter a commons based on....human excrement. Even more surprising is that this valiant little commons, dedicated to using the human biome to benefit everyone, may soon be enclosed by Big Pharma. Yes, there is big money in turning our shit into branded, proprietary product.

First, a little background (from an excellent NYT article on the topic). OpenBiome is a Cambridge, Massachusetts stool bank that provides people with bottles of a “mud-colored slurry” used in fecal transplants. In recent years, physicians have made the amazing discovery that transferring the microbiota of healthy donors into the guts of people with certain illnesses can rescue them from death’s door and cure them. OpenBiome assists in this process by collecting stool donations from the public, processing them in safe and reliable ways, and making them available to patients and doctors for F.M.T., or fecal microbiota transplantation.

Tens of thousands of people suffer from the bacterial infection Clostridiodes difficile, or C. diff, for example. Fecal transplants have proven to be effective in 80% of these patients. Some feel much better within hours. Working as a nonprofit, OpenBiome helps such people by producing between 900 and 1,000 fecal transplant treatments each month, for about $800 apiece.

How to Rein in Monopoly-like Network Platforms?

The latest issue of Boston Review has a lively forum on the growing power of network-based businesses such as Amazon, Uber and Airbnb.  These companies may not be monopolies in the strict conventional sense of the law, but they nonetheless use their market dominance and network platforms to extract all sorts of advantages from competitors, suppliers and consumers.

K. Sabeel Rahman, a professor at Brooklyn Law School, presented his assessment of the situation, and then nine people of various persuasions (including me) responded.  Rahman stated the problem succinctly:

The kinds of power that Amazon, Comcast and companies such as Airbnb and Uber possess can’t be seen or tackled via conventional antitrust regulations.  These companies are not, strictly speaking, monopolies; Urban and Airbnb, in particular, do not engage in the kind of price-fixing or market dominance that is the usual target of antitrust regulation today.  These companies are better understood as platforms or utilities:  they provide a core, infrastructural service upon which other firms, individuals and social groups depend.

The problem is that conventional antitrust regulation isn’t really equipped to deal with information economy platforms, which tend to connect buyer and sellers in more efficient ways while offering very low prices. What’s the problem with that? Well, the problem is open networks paradoxically result in "power law" outcomes in which a minority of players tend to dominate the universe of users. Some companies have used this network-based advantage to limit competitors' access to the market, impose unfair conditions on consumers or producers, and evade consumer and labor-rights laws.

Rahman calls for a re-purposing of Progressive era policies from a century ago that tamed large monopolies like railroads by subjecting them to public utility regulation. Is this the way to go? Juliet Schor of Boston College agrees that there is a problem, but considers the regulatory approach nostalgic and unimaginative. She argued:

“Peer-to-peer structure and peer ownership of capital undermine the argument for private ownership of platforms and, by extension, for the public utility model.  This is not to say there isn’t a strong public interest in this sector – there is.  But the compelling feature of these entities is that most of the value in the market is produced by the peers, not the platforms.  This suggests that platforms can and should be owned and governed by users.  If they are, we can worry less about rent extraction, concentrations of political power, and the other concerns Rahman raises.”

Bring on the Participatory Sensing

Freedom From Harm: The Civilizing Influence of Health, Safety and Environmental Regulation

Public Citizen and Democracy Project, 1986.  Co-authored with Joan Claybrook.  This book surveys the neglected, life-saving, civilizing benefits of health, safety and environmental regulation, which are typically understated or ignored by cost-benefit analysis and corporate adversaries of regulation.  In particular, the book focuses on the Food and Drug Administration, the Environmental Protection Agency, the National Highway Traffic Safety Administration, the Consumer Product Safety Commission and the Occupational Safety and Health Administration. 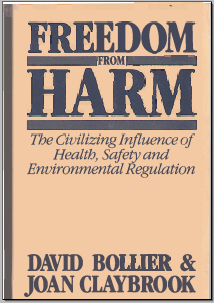 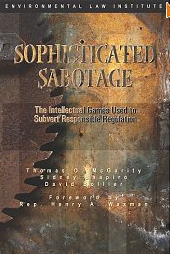