Imagine a Future of Distributed Cooperatives, or DisCOs

For too long, discussions about how blockchain software could change the world have been dominated by libertarian-minded techies and market-driven startups. No wonder they are dazzled by Bitcoin, the currency for capitalist speculation, and by turbo-charged networked markets.

This approach has left a huge void in our thinking about alternative futures -- ones that could be progressive, cooperative, and collectively emancipatory, and not just the next, more stifling iteration of capitalism. We need to ask: What sorts of systems might be possible if we were to design new tech platforms and protocols to facilitate commoning?

How refreshing that we now have some answers. The basic idea is to create variations on a new institutional form, the “Distributed Cooperative Organization,” or DisCO. Check out 80 riveting pages on this topic, an extended essay entitled, “If I Only Had a Heart: The DisCO Manifesto,” published by the Guerrilla Media Collective in collaboration with the Transnational Institute.

The authors of this essay are my friends and colleagues Stacco Troncoso (lead author) and Ann Marie Utratel (coauthor and lead editor). Both have long worked with the P2P Foundation, Commons Transition, Guerrilla Translation and Guerrilla Media Collective groups. (Full disclosure: I gave the authors some comments on early drafts.)

In blockchain circles, there is much enthusiasm for DAOs, or decentralized autonomous organizations. These are free-standing, self-organized groups of people who use blockchain tools to structure their members’ interactions and behave as “ownerless” organizations or institutions. The idea behind DAOs is to “allow people to exchange economic value, to pool resources and form joint-ventures, without control from the center, in ways that were impossible before blockchains; and to agree on how risks and rewards should be distributed and to enjoy the benefits (or otherwise) of the shared activity in the future,” as Ruth Catlow of the Furtherfield Collective writes in a crisp foreword.

This is indeed an exciting prospect, but DAOs are generally envisioned as a new breed of “trustless” market organization. They function on the same epistemic plane as capitalism, with everyone treated as isolated individuals looking to maximize their personal (monetary) interests.

DisCOs, by contrast, start from a different set of premises about humanity. They regard we humans as a cooperative species whose members need and want to engage with others, personally. Earned trust among people and open collaboration can then achieve some remarkable things. That’s the essential goal of DisCOs, which consist of a set of organizational tools and practices for people who want to work together in a cooperative, commons-oriented, and feminist economics form.

The question that this report seeks to answer is how these social impulses and practices can be structured and facilitated by tech platforms, and made stable and durable.Toward this end, the report identifies seven principles that characterize distributed cooperatives:

1. Geared toward positive outcomes in key areas (such as social and environmental priorities)

6. Re-imagining the origin and flow of value

While DisCOs can obviously have profound effects for the people affiliated with them, they have larger implications. They are capable of “injecting democracy into our economic systems (and politics and society in turn),” writes Catlow. “Funded by direct member investment, rather than investment from third-party shareholders, co-operative members ‘decide on the values of the enterprise, which don’t necessarily need to be about the maximization of profits’."

The report also talks about “open-value cooperativism,” the idea that coops can move beyond market valuation as the central goal and “expand our economics and accounting to include care for living systems.” This is a theme that feminist economists has developed in much of their literature about “care work.” 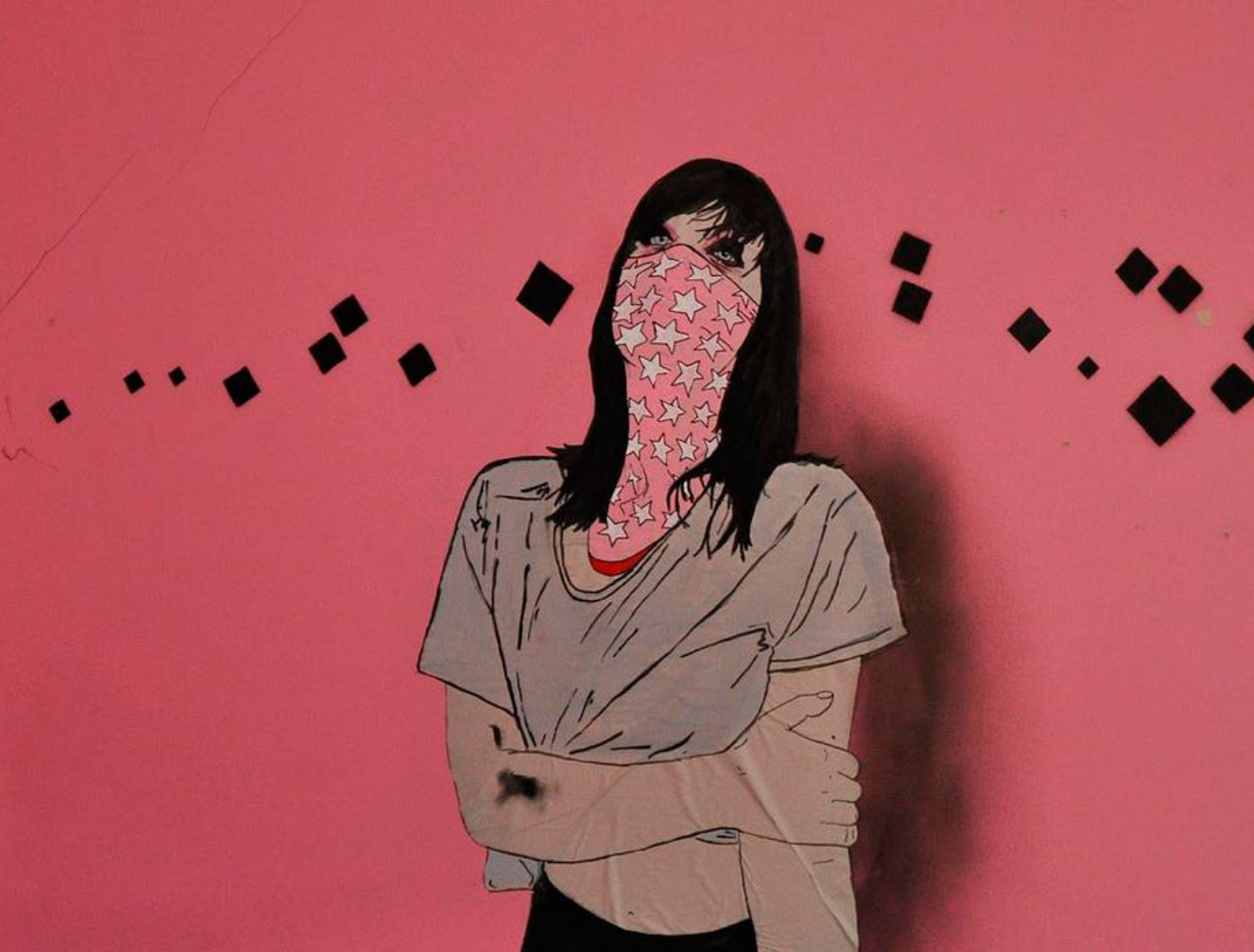 Another advantage of DisCOs is their distributed nature. Because they are not centrally controlled, but autonomous and distributed, DisCOs can “maximize radical and emancipatory cooperation across national borders (on- and off-chain) while operating within the laws locally (at least until we can change them).”

An unexpected pleasure of this report is its many dazzling, artful illustrations, photos, and embedded illustrations. They point to the wide range of influences on the authors, from philosopher Donna Haraway and network analysts like Paul Baran and Dmytri Kleiner, to Internet cats and pop music lyrics.

This is a report by, of, and for digital natives. It is aswim in contemporary culture but informed by serious thinkers and history. Especially in their account of the Guerrilla Media Collective as a DisCO, the authors lay claim to an aesthetic of “punk elegance.” To which I can only say, “Rave on!”

Check out this report – an hour’s read. It’s serious in its explanations and polemics, accessible and fun in its presentation, and a timely vision of how people might design tech platforms and social norms for a world of commoning.

I’ve been looking for ideas like this — ideas for new forms of organization that are build for networked cooperation right from the start, in contrast to conventional corporations that are built for stand-alone competition.  DisCO is the best I’ve seen so far.  Many thanks for pointing to it.

I’m interested because, as you may recall, I’m convinced for theoretical reasons that a distinct separate new sector is slowly emerging that will take its place alongside the established public and private sectors, not to mention the neglected civil-society sector(s).  This fourth sector will be organized around new network designs, and will become home to those actors and activities that have become way too complex and difficult for the earlier sectors (and their forms of organization to manage.  As I look around and wonder specifically which actors and activities these may be, I’ve settled on the following: health, education, welfare, the environment, and related insurance matters — a set of matters that all have to do with collective and individual care, a set of matters best treated in/as a commons.

So here’s my question:  Suppose that before long enough people realize that all these matters should be moved into a commons sector.  For example, suppose that all schools at all educational levels, public and private, are re-organized into this new (and surely non-profit or for-benefit) sector.  Will DisCO, enhanced by Big Data and AI, be more-or-less the key concept for thinking about how best to assure this next/new sector functions?  Is there a better concept being discussed anywhere?

You’ll notice that the commons sector posed here is defined by a particular boundaried set of actors and activities.  All other commons-sector proposals I’ve come across seem wide-open — they aim to include any actor or activity that adheres to commons principles and acts accordingly.  Moreover, these proposals say this commons sector will be a new economic sector.  In contrast, the theoretical framework I’m using about long-range social evolution forecasts that the emerging sector will be as bounded and distinct as the prior sectors, in its own way, and will be something other than an economic sector.  Of course, it may be viewed from economic perspectives, as may any of the prior sectors; but its essence will not be economic, for we already have that in the current markets-based sector, messed up though it is.  So far, I’ve deduced that assurance of care will be the essence of the new sector.  So, I’m delighted to see the concept of care figure in DisCO.

I’ll hope that you (or others) can address my question above. An organizational revolution will be essential (just as, across the centuries, earlier such revolutions were required for the evolutions of the earlier sectors).

Hi David -- I fully agree that a revolution in organizational forms is necessary and inevitable, and that the care work of commoning will be essential to their success. Part of the struggle of our times, as I see it, is simply emancipating our minds from many entrenched thought-categories about institutional forms (business, nonprofit, government, cooperative, etc.). In this regard, the DisCO concept stands as a solid hybrid whose conceptual DNA starts at a different place, as you note, and points to functional new ways of moving forward.

I am a fan of DisCO, but I also think that we are in a period of intense experimentation about organizational forms. Think cosmo-local production (a variety of P2P), platform coops, open value networks, and the many varieties of commons described in Patterns of Commoning and Free, Fair and Alive (my books with Silke Helfrich). It's unclear at this point which of these modes will "go the distance" and become solid, accepted archetypes, and indeed, whether our initial understandings and descriptions will seem adequate later. (Think how "cybernetics" is now a dated discourse, for example.)

It's important to stress that an organizational form is not merely a legal formality; it must be socially enacted and embody certain values and cultural norms. A blend of structure + sociality. As in, "There is no commons without commoning." The legal forms may enable or be somewhat odd (I know of a major commons whose legal form is a limited liability partnership); what may matter more is how the commoners peer govern themselves and meet their needs.

I do think that there is a much-overlooked distinction to be made between "open" systems and commons. Silke and I explore the misleading bindary of "open" vs. "closed" in Free, Fair and Alive. We note that the focus on free access in "open systems" ascribes traits to the resource itself (code, text, images) and generally fails to grapple with the social dynamics that are essential to stewarding the care-wealth (curating, organizing, group collaboration, funding, sanctions against rule-breakers, etc.). In other words, "openness" is an inadequate criterion for commons. In many open systems, the anonymity and casual commitment of users means that not much genuine commoning is going on.

An open system is therefore more vulnerable to enclosure or co-optation than a bounded commons. Such a commons does not function as a "club" asserting exclusive property rights, but as a coherent group whose "semi-permeable membrane" of interactions blocks harmful forces from the outside world while allowing positive forces to enter/participate.

The point is that actual care and commitment are needed in a commons. The "free access" of an open system is often not enough.

Not sure if these thoughts address your questions, David, but that's what your comments prompt me to say. I agree with you: new organizational forms are needed. I'm betting that they will need to rely on commoning and care to work well.

Many thanks for your reply, David. Helpful and pertinent.  A few follow-on comments:

I’ve taken a closer look at the DisCO document. It remains germane to my interests, but I don’t see that it offers a clear view of how to combine organizations (be they a multitude schools, hospitals, whatever) into the fourth sector I’ve sensed is coming.

Also intriguing is a proposal for constructing an “education assurance commons” by William Graves some years ago. He envisions it “as a compact that is operationally enabled by a loosely coupled governance structure representing the common interests all involved parties” (p. 49).  But I’m still left unclear about many aspects of organizational design. I suppose you’ve seen his proposal; if not, it’s at: https://institutionalperformance.typepad.com/WHG/Waste_Not_the_Learning_...

Yes, I continue to admire and refer to your publications.  We recite several in a hopefully-forthcoming paper updating our ideas about “noöpolitik” and the future of statecraft, in a new section about upholding the concept of the “global commons” (not so easy now).  This paper also reiterates briefly our old concept about “guarded openness” — it speaks to how we once addressed your concerns about open vs. closed systems.

BTW, when did you first propose  the idea of a “commons sector”?  2006 in The Commons Rising?  Earlier?  I want to know for draft about ideas for new sectors.