Bringing Degrowth and Commoning to Fashion

On the latest episode of my Frontiers of Commoning podcast (Episode #23), I speak with Sara Arnold and Sandra Niessen, two leading activists who are boldly calling for "a radical defashion future" based on degrowth, commoning, and clothing cultures that escape consumerism.

Through the organization Fashion Act Now, a growing band of dissident fashionistas want to make the clothing industry more ecologically responsible, relocalized, and culturally in sync with this moment in history, especially with respect to climate change, economic justice, and decolonialization. This means greatly reducing the industry's resource and energy use, and moving away from hyper-consumerist "fast fashion" business models that generate colossal waste and ecological harm.

My podcast interview with Arnold and Niessen is a spirited, often surprising conversation. It's not often that I've heard the words "fashion," "biodiversity" and system-change" uttered in the same sentence.

British fashion designer Sara Arnold started her career by launching a clothing rental platform, Higher Studio. Her idea was to incentivize a more environmentally sensitive "circular economy" in clothing by promoting rentals and re-use over consumption.

Sounds good, but she soon realized that her business  was actually helping to expand the market for clothing. Moreover, she saw that there are many larger environmental and climate problems that the fashion industry is largely ignoring.

So Arnold joined Extinction Rebellion to organize its #BoycottFashion and Cancel Fashion Week campaigns. Taking things further, in 2020 she co-founded Fashion Act Now as a campaign organization for defashion -- a term she coined to describe deep, systemic shifts in the industry that can address climate change and respect planetary limits.

The basic challenge, said Arnold, is "to bust the myth of fashion," said Arnold. "Essentially, the whole system is held up by the myths that are projected out to us through marketing." For Fashion Act Now, the industry needs a cultural makeover. It needs to stop marketing fantasies that the latest clothes will bring happiness, sexual satisfaction, social privilege, and protection from real world problems. The industry also needs to wean itself away from "fast fashion" production cycles that produce astonishing quantities of cheap clothing that quickly ends up in landfills.

Fashion Act Now asks: Why not develop a system that produces durable, high-quality garments that reflect local traditions and needs?

For Sandra Niessen, a Dutch-Canadian fashion scholar and activist, it's important to call out the colonial dimensions of fashion that persist to this day. The industry's exploitation of the global South is most vividly evident in its use of low-paid sweatshop labor. But it is also seen in the dominance of global clothing markets and cultural norms, which inexorably subvert local garment production and customs. To be smart, modern and socially admired, according to the fashion industry, people must reject one's native clothing system and embrace European and American styles of dress (through consumerism, of course).

In her decades of work with Batak indigenous textile weavers in North Sumatra, Indonesia, Niessen has seen the steady decline of traditional clothing designs and practices. "A whole ethnic group and tradition has been turned into a 'sacrifice zone' for capital-F Fashion. Fashion is a huge thief. It steals indigenous peoples' designs. It steals well-being by harming the physical environment. It's stealing the past by glossing it over with its glitzy exterior."

Niessen cites the artificial creation of "coolness" through advertising as an essential pillar of capitalist fashion: "When you think about clothing, do we really need that sense of 'cool'?  That's exactly what the fashion system does, and that's how it co-opts [everything] all the time. When you think about it, fashion is planned obsolescence. It's the movement from one design to the next to the next, and the faster that happens, the greater profits a company can accrue. If you don't have advertising and consumers running after the next thing, you don't have capitalist fashion any more."

The fashion industry can become sustainable only if it comes to terms with this truth, Niessen asserted. Interestingly, Vogue Business, a trade publication, recently offered a sympathetic, well-reported profile of degrowth activists in fashion. The piece, by Bella Webb, pointed to a number of serious degrowth initiatives, such as the 2019 manifesto by Professor Katie Fletcher, "The Earth Logic Fashion Action Research Plan." 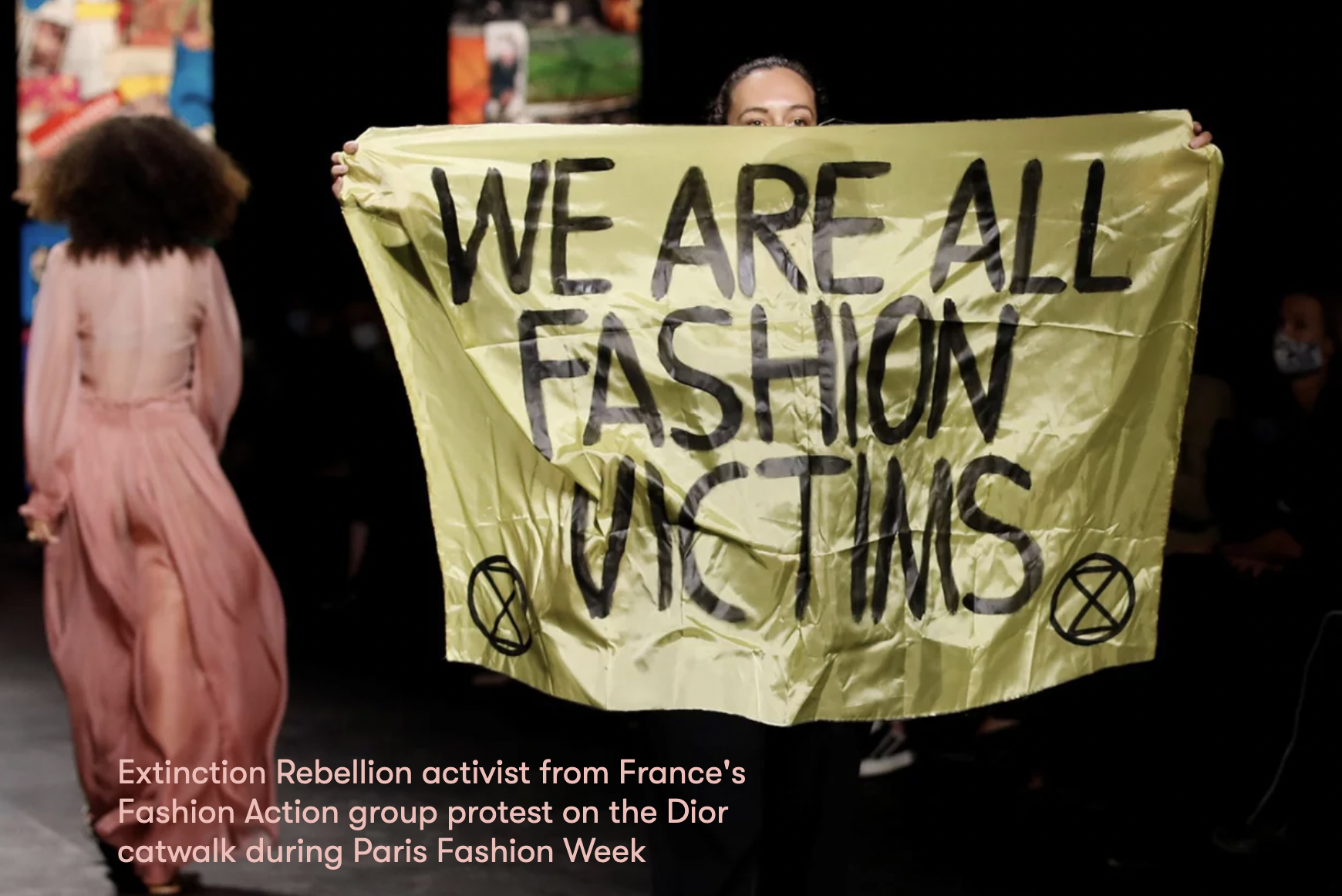 Some might worry that degrowth in fashion will result in far less creativity in clothing design. Niessen bluntly rejects this argument: "There are thousands of clothing systems in the world. It's just that the particular clothing system in the West, associated with one economic system, has blown its culture out of proportion and given it a global reach. If you think about degrowth -- shrinking the industry down to size and focusing again on locality -- you will see a return of pluriversality in clothing design," she said. The system will become "so much richer [in creativity] than the existing fashion system." which has turned the entire world into a single, more homogeneous market.

While degrowth initiatives in fashion are still in their early stages, they are offering some remarkably innovative approaches to reduce consumption, encourage repair and re-use of clothing, and promote local self-sufficiency.

For example, the London Urban Textiles Commons provides "regenerative textiles" to clothing makers. Upcycling clothing and repair services for old clothing are emerging, such as Dr. Amy Twigger Holroyd's project, ReKnit, which encourages people to reknit the knitwear in their wardrobes.

Holroyd, a professor at Nottingham Trent University, also hosts a network of makers, curators and academics focused on craft practices, at the Crafting the Commons website.  The Linen Project in the Netherlands is experimenting with small-scale, local agriculture to produce flax, used in making linen cloth, with the goal of producing garments that are homemade, artisanal, and sustainable.

You can listen to my interview with Sara Arnold and Sandra Nissen here.

Actually building the Commons for fashion!

Hi David, I really enjoyed this conversation. And I'm excited to say that this vision is already in progress and anyone thinking- wow! That ultra creative, locally distinctive, well fitting clothing sounds AMAZING, can join us and be part of it.