The Great Lakes Commons project has embarked upon an ingenious campaign to reimagine money, value and water protection by issuing its own time-limited “Currency of Care.” The bills are not likely to be used for commercial transactions.  In a way, that is the point – to spark a new conversation about money, value, community and the Great Lakes.

“Each note represents the act of giving gratitude or requesting action. Each note carries the most precious value: acts of thanks and care for the Great Lakes. Rather than based on dollars, the value of these notes is our collective agreement and intention to reward people for their water protection through past actions (saying ‘thanks’) or future actions (saying ‘please’).  Because our current money systems only acknowledge economic utility and gain, our Great Lakes Commons currency needs a wildly different theory of value -- such as past/future actions for water care.” 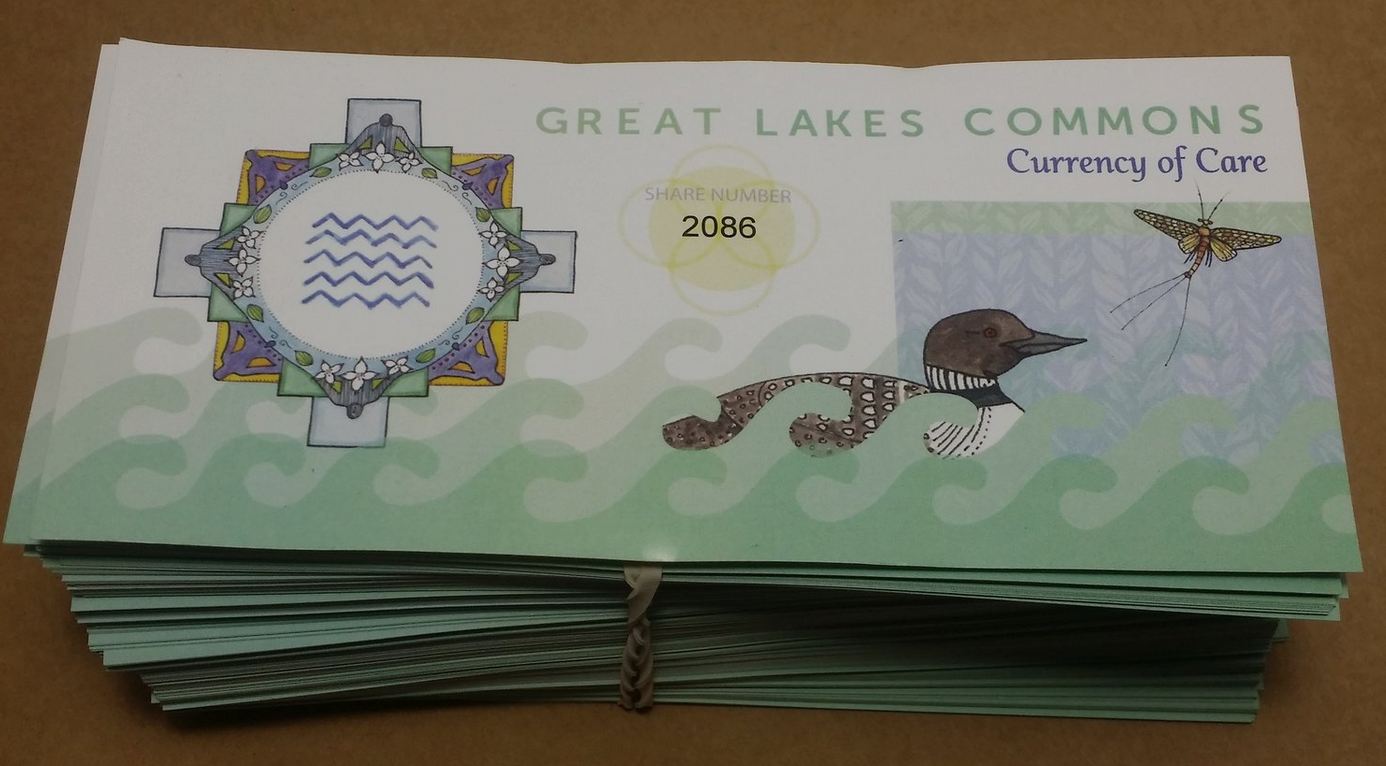 More than 5,000 individually numbered bills have been distributed, all of them due to expire at end of year.  Why the expiration date?  Because “this currency is for sharing not saving,” the currency webpage explains.  “The value of this currency comes through its use -- its current.  The rules of today’s dollar system rationalize hoarding and controlling money to make more money.  The needs of healthy people and living water are denied not because there isn’t enough money in the world, but because it makes ‘sense’ to accumulate/hoard more and to spend it otherwise.”

Democratic Money and Capital for the Commons

One of the more complicated, mostly unresolved issues facing most commons is how to assure the independence of commons when the dominant systems of finance, banking and money are so hostile to commoning. How can commoners meet their needs without replicating (perhaps in only modestly less harmful ways) the structural problems of the dominant money system?

Fortunately, there are a number of fascinating, creative initiatives around the world that can help illuminate answers to this question – from co-operative finance and crowdequity schemes to alternative currencies and the blockchain ledger used in Bitcoin, to reclaiming public control over money-creation to enable “quantitative easing for people” (and not just banks).

To help start a new conversation on these issues, the Commons Strategies Group, working in cooperation with the Heinrich Böll Foundation, co-organized a Deep Dive strategy workshop in Berlin, Germany, last September.  We brought together 24 activists and experts on such topics as public money, complementary currencies, community development finance institutions, public banks, social and ethical lending, commons-based virtual banking, and new organizational forms to enable “co-operative accumulation” (the ability of collectives to secure equity ownership and control over assets that matter to them).

I’m happy to report that a report synthesizing the key themes and cross-currents of dialogue at that workshop is now available.  The report is called “Democratic Money and Capital for the Commons:  Strategies for Transforming Neoliberal Finance Through Commons-Based Alternatives,” (pdf file) by David Bollier and Pat Conaty.

You could consider the 54-page report an opening gambit for commoners to discuss how money, banking and finance could better serve their interests as commoners.  There are no quick and easy answers if only because so much of the existing money system is oriented towards servicing the conventional capitalist economy.  Even basic financial terms often have an embedded logic that skews toward promoting relentless economic growth, the extractivist economy and its pathologies, and the notion that money itself IS wealth.

That said, commoners have many important reasons for engaging with this topic.  As we put it in the Introduction to the report, “The logic of neoliberal capitalism is responsible for at least three interrelated, systemic problems that urgently need to be addressed – the destruction of ecosystems, market enclosures of commons, and assaults on equality, social justice and the capacity of society to provide social care to its citizens. None of these problems is likely to be overcome unless we can find ways to develop innovative co-operative finance and money systems that can address all three problems in integrated ways.”

It’s hard to find many co-operatives with the kind of practical sophistication and visionary ambitions as CIC – the Catalan Integral Cooperative -- in Spain.  CIC describes itself as a “transitional initiative for social transformation from below, through self-management, self-organization, and networking.”  It considers the state unable to advance the public good because of its deep entanglements with market capitalism -- so it has set about building its own working alternatives to the banking system and state.

Since its founding in May 2010, CIC has developed some 300 cooperative projects with 30 local nodes, involving some 4,000 to 5,000 participants.  You can get an idea of the impressive scope of CIC’s work through this interview with Enric Duran by Shareable magazine in March 2014. It’s fairly clear that CIC is serious about building a new global economic system – and not just as a rhetorical statement.  CIC builds real, working alternatives, showing great sophistication about politics, law, economics and digital platforms.

CIC has now started Fair.Coop to help build a set of free economic tools that will “promote cooperation, ethics, solidarity and justice in our economic relations.” A key element of the Fair-Coop vision is a cryptocurrency, Faircoin, which has been designed to adapt the block-chain technology of Bitcoin with a more socially constructive design. (Faircoin relies less on "mining" new coins than on "minting" them in a more ecologically responsible, equitable ways.)

Many skeptics might scoff at the brash, utopian feel of this initiative.  But in many respects, Faircoin is the ultimate realism. CIC correctly recognizes that the existing monetary system and private banks pose insuperable barriers to reducing inequality and ensuring productive work and wealth for all. The only "realistic" alternative to existing fiat currencies and foreign exchange is to invent a new monetary system!  Fortunately, thanks to the pioneering examples of Bitcoin and other cryptocurrencies and the evolving powers of software, that idea is actually within reach these days.