Furtherfield: The Power of Art and Play in Imagining New Worlds

Here's a fanciful but almost-real scenario: the bees, squirrels, geese, bugs, trees, and other species of your local park have decided that they've had enough of human aggression and abuse. They're not going to take it anymore, and rise up and demand equal rights with humans. Through a series of interspecies assemblies, a treaty is negotiated to ensure that every living being in the local ecosystem can flourish.

This scenario is a "live action role-playing" (LARP) game devised by Furtherfield, a London-based arts collective as part of its stewardship of part of the Victorian-era Finsbury Park. Over the next three years, Furtherfield is inviting humans to don masks and play the roles of each of seven species in negotiating "The Treaty of Finsbury Park 2025" -- the name of the project. 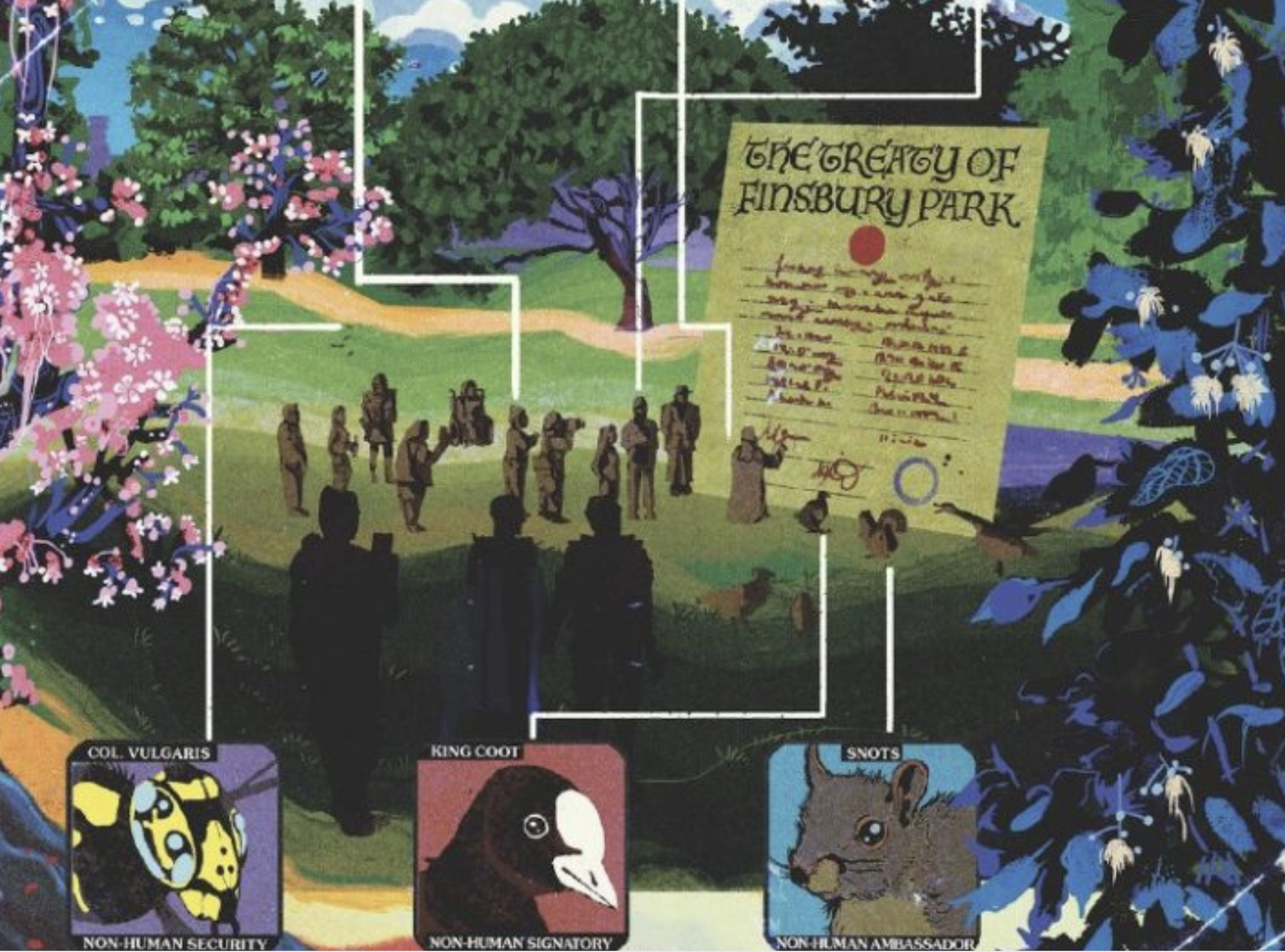 By casting humans as beetles and squirrels attending Interspecies Assemblies as delegates of their species, the LARP aims to help people develop "empathic pathways to nonhuman lifeforms through play." There is even a Sentience Dial to help different species communicate with each other. Who knows, this process may actually make Finsbury Park a more lush and lively place?

This adventure in animism is just one project that Furtherfield has hosted over the past 25 years, most of which blend art, digital technologies, and social action in some creative fashion. In my latest Frontier of Commoning podcast (Episode #24), I speak with Ruth Catlow about Furtherfield's distinctive approach to participatory art as a way of thinking anew about the world.

Catlow, an artist, curator, and co-leader of Furtherfield, has been a guiding visionary for its many artistic projects since its inception in 1996. She helps orchestrate collaborations with various local, national and international partners -- but especially with ordinary people. The point of its many artworks and technology projects is to try to get us to see the world differently, and to honor the role of art in envisioning new futures for ourselves.

What does enclosure feel like from the inside, as a lived experience, as a community is forced to abandon its “old ways” and adopt the new worldview of Progress and Profit?  British author Jim Crace’s novel, Harvest, a finalist for the Man Booker Prize in 2013, provides a beautiful, dark and tragic story of the first steps of the “modernization” of a preindustrial English village.

The story focuses on a hamlet that is suddenly upended when the kindly lord of the settlement, Master Kent, discovers that his benign feudal control of a remote patch of farmland and forest has been lost to his scheming, cold-hearted cousin, Edmund Jordan.  Jordan is a proto-capitalist who has a secret plan to evict everyone and turn their fields into pastures for sheep.  He plans to become rich producing wool for the flourishing export market.  But Jordan can’t simply announce his planned dispossession of land lest it provoke resistance.  He realizes that he must act with stealth and subterfuge to take possession of the land and eradicate the community, its values and its traditions.

The story is essentially a tale of what happens when a capitalist order seeks to supplant a stable and coherent community.  But this states the narrative too crudely because the book is a gorgeously written, richly imagined account of the village, without even a hint of the ideological.  Told through the eyes of a character who came to the village twelve years earlier, the story doesn’t once mention the words “enclosure,” “capital” or “Marx.”  (Indeed, the Wall Street Journal’s reviewer praises the book for “brilliantly suggest[ing] the loamy, lyric glories of rustic English language and life.”)

Harvest depicts the sensuous experiences of a village community wresting its food from nature, but with relative peace and happiness.  "Our great task each and every year is to defend ourselves against hunger and defeat with implements and tools. The clamour deafens us. But that is how we have to live our lives," the narrator tells us.  The book also shows how easily this world is shattered by a brutal outsider who uses fear and social manipulation to rip apart a community in order to install a new regime of efficiency, progress and personal gain.

It is always refreshing to read Peter Linebaugh’s writings on the commons because he brings such rich historical perspectives to bear, revealing the commons as both strangely alien and utterly familiar. With the added kick that the commoning he describes actually happened, Linebaugh’s journeys into the commons leave readers outraged at enclosures of long ago and inspired to protect today's endangered commons.

This was my response, in any case, after reading Linebaugh’s latest book, Stop, Thief!  The Commons, Enclosures and Resistance (Spectre/PM Press), which is a collection of fifteen chapters on many different aspects of the commons, mostly from history.  The book starts out on a contemporary note by introducing “some principles of the commons” followed by “a primer on the commons and commoning” and a chapter on urban commoning.  For readers new to Linebaugh, he is an historian at the University of Toledo, in Ohio, and the author of such memorable books as The Magna Carta Manifesto and The London Hanged.

Stop, Thief! is organized around a series of thematic sections that collect previously published essays and writings by Linebaugh.  One section focuses on Karl Marx (“Charles Marks,” as he was recorded in British census records) and another on British enclosures and commoners (Luddites; William Morris; the Magna Carta; “enclosures from the bottom up”).  A third section focuses on American commons (Thomas Paine; communism and commons) before concluding with three chapters on First Nations and commons.

Diggers 2012 Set Up Camp at Runnymede

In development that feels strangely like kismet, an encampment of dispossessed young people who wish to opt out of the corporate system and reclaim a basic freedom of working the land, have made their way to Runnymede, a hallowed site in the history of the commons.

Runnymede is where King John signed the Magna Carta in 1215, settling the long civil war with barons and commoners, and leading to the Charter of the Forest that granted explicit commoning rights to commoners.  Runnymede is therefore an appropriate place for contemporary Occupy-style encampments.  It's where the king formally recognized that he was not above the law, and that the commoners have rights that must be respected.  But history and king-like proxies have papered over such truths.  (Peter Linebaugh's Magna Carta Manifesto is THE book to read on this subject.)

A group that calls itself Diggers 2012 is now trying to engineer a rendezvous between that past and a commons-directed future.  After being forced out of their encampments in London, the Diggers are now establishing their own Runnymede Eco Village. (Thanks for the alert on this news, James Quilligan!) The Diggers want to secure their own right to the land and to develop their own autonomous system for self-governance and subsistence.  Some want to create a banner, "We don't want workfare, we want landshare!"

After being shooed from one place to another, and suffering the destruction of their plantings, the Diggers decided to set up camp at Brunel University’s Runnymede campus, which has gone unused for six years and is poised to become a construction site for apartments.  In The Guardian, columnist George Monbiot has a wonderful column about the encampment at Runnymede, which he described as “a weed-choked complex of grand old buildings and modern halls of residence, whose mildewed curtains flap in the wind behind open windows, all mysteriously abandoned as if struck by a plague or a neutron bomb.

The Diggers are off on an out-of-theway, unused piece of land. Not exactly a prime location on which to attract attention.  But they are nothing if not determined to make a point and build another world. As one camper explained:  “Like our forbearers, ‘The Diggers’ of the mid 17th Century, we too will face the same forms of oppression as we attempt to make use of the disused land. And like the Diggers, we are committed to continuing our mission to make use of the disused land in the face of brute force. So if the bailiffs come, we may go, but we may too come back and keep coming back. For you can tear down our structures and rip out our crops, but you cannot kill the spirit of our vision. We are not here to fight anyone. We know in our hearts that our activities are just and reasonable. So we will carry on.”

A thousand-year-old tradition of farming commons in southern England may be jeopardized as housing prices drive out farmers and render the commoning rights moot.  Yes, there are still self-identified commoners in England.  BBC radio recently interviewed a handful of the remaining commoners who rely upon the New Forest in Hampshire to feed their cattle, sheep and chickens.  The 23-minute radio report focused on how the farming commons is a way of life that has preserved the distinctive ecological landscape – and how this future is now in doubt.

New Forest is said to be the largest remaining tracts of unenclosed pasture land, healthland and forest in the southeast portion of England.  The land became a royal forest in 1079 when King William I shut down 20 hamlets and isolated farmsteads, provoking an uproar.  He then consolidated the land into a single tract, the New Forest, which he used for royal hunts.

The traditions of commoning in the New Forest are quite involved and detailed, as Wikipedia notes:

Commons rights are attached to particular plots of land (or in the case of turbary, to particular heaths), and different land has different rights – and some of this land is some distance from the Forest itself.  Rights to graze ponies and cattle are not for a fixed number of animals, as is often the case on other commons. Instead a marking fee is paid for each animal each year by the owner. The marked animal's tail is trimmed by the local agister (Verderers’ official), with each of the four or five Forest agisters using a different trimming pattern. Ponies are branded with the owner's brand mark; cattle may be branded, or nowadays may have the brand mark on an ear tag.